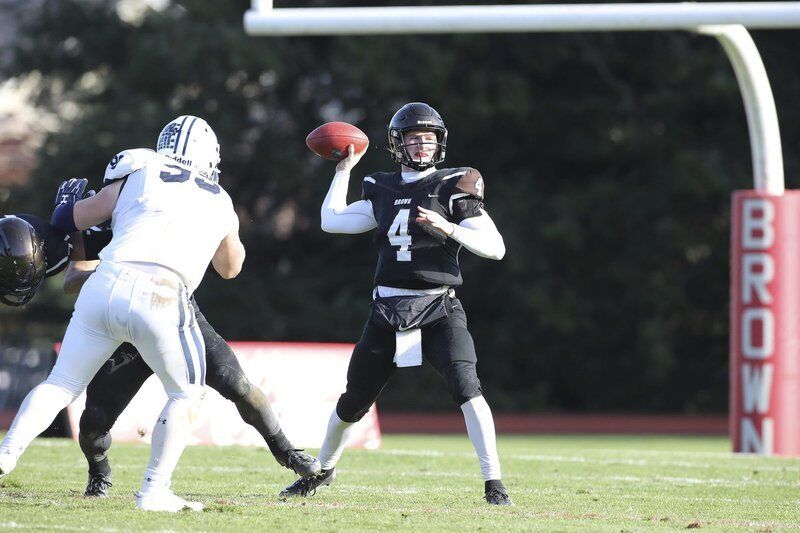 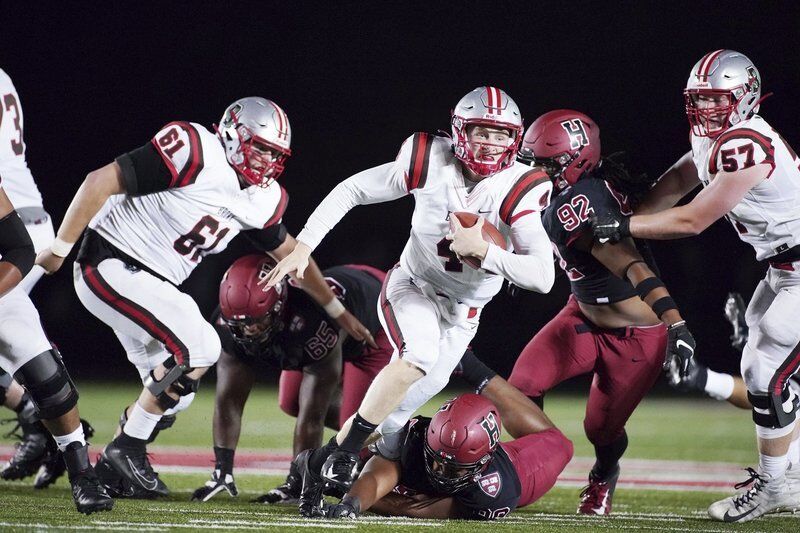 There are many reasons a football coach would fall in love with E.J. Perry IV.

The numbers speak for themselves. They are historic.

But the answer to one question may say a lot more about what makes E.J. Perry E.J. Perry.

When he was asked what he’d give himself for a grade last fall, the Brown University quarterback from Andover said, “20.”

Twenty? A failing grade for the runner-up for the Ivy League Offensive Player of the Year?

Four of the losses went down to the wire (3, 2, 2 and 6 points) so the Bears were gung-ho to have a breakout 2020 season. But in early July, the Ivy League was America’s first 1-A/1-AA conference to cancel football for the fall season.

The rest of the Ivy League gets a bit of a reprieve.

As Brown head coach James Perry, E.J.’s uncle, said, “He’s only scratching the surface of what he will do.”

The Bears are just hoping the Ivy League has some sort of season in the spring.

“It was devastating news,” said E.J., who was the second-string signal-caller for two seasons at Boston College before transferring to the Providence school last year.

“Obviously, it’s much more devastating for all the families (who lost loved ones to COVID-19). As much as I want to bang my fist and say, ‘Why me?’ We are just preparing for when they let us back.”

The postponed fall season changed a lot for Perry. He slowed down his aggressive rehab from the mid-February posterior labrum surgery on his right (throwing) shoulder.

The senior has just begun throwing the football and reports, “I’m near 100 percent” he said in August.

He’s taking the fall semester off and is doing a remote internship for a financial firm in Providence.

Perry said, “We’d love to go out and compete. That would be amazing. Hopefully, we’ll play something in the spring. The NCAA made the great announcement that this will not count toward your eligibility.”

So he’d have a full season of eligibility left even if they did have a full or more likely abbreviated season in the spring.

There were a lot of rumors he might get some late-season starts for BC, but his freshman season with the Eagles consisted of only a few meaningless snaps in one game. It was enough, though, to cost him an entire year of eligibility.

“We failed in the pursuit of another year,” he said. “There have been some things with the NCAA so maybe that might change.”

The Eagle-Tribune Football Player of the Decade graduated a semester early from Andover High to report to BC early. He couldn’t unseat Anthony Brown for the starting spot but has nothing but positives to say about BC.

“I loved my time at BC,” said Perry. “Playing at the highest level is what everyone dreams of.”

Brown obviously was well-positioned with his uncle, a few months prior, named the new head coach. But Perry said he did his due diligence.

He looked closely at some other 1-A schools like Rice in Texas, although he would have had to sit out a year. He visited 1-AA Brown, Holy Cross and Villanova.

The Ivy League is non-scholarship so Holy Cross and Villanova had that advantage but in the end playing for his uncle and the Ivy League education won out.

“He has an amazing track record with quarterbacks and offenses,” said E.J., who said he has a 3.5 GPA as a business major at Brown.

“I’m blessed to learn from him. Since freshman year in high school, he’s been giving me advice. It wasn’t because he’s my uncle but the caliber of coach he is. Then the Ivy League education and my family can come to every game.”

Coach James Perry said, “In the first week of practice (late last summer), he’d take any run he had 40 yards. By the end of the week he had totally changed the dynamic of practice. The team knew the intensity they had to practice at to keep up.”

The league coaches were believers. Since 1978, 42 seasons, this was only the third time they’ve named two quarterbacks All-Ivy. Kurt Rawlings of Ivy League co-champion Yale, was named Offensive MVP and Perry was runner-up Offensive MVP.

Despite playing just the one season, Brown also named him the quarterback on its All-Decade Team.

What separates E.J. from all the previous talented Perrys is his athleticism. He can bench press 305 pounds, has a 34.5-inch vertical leap and a 10-2 broad jump. Even with all the gifted athletes at BC, he was top five on the team in the shuttle run. He’s been clocked at 4.53 seconds hand-timed in the 40-yard dash.

He has the famed Perry toughness. James played one season at Brown basically on one leg and E.J. had to play through considerable shoulder pain the last three games.

“I really couldn’t feel my arm,” he said. “It was extreme pain. Our trainer, (former Merrimack lacrosse player) Erin Variano, did an amazing job.”

E.J. played some varsity basketball for the Bears, too. From the outside looking in, that might appear to be a mistake. After all, why not get the surgery right after the football season?

Was that a mistake?

“No. I enjoyed every second of it,” said the 6-2, 212-pounder, who played in two games last winter. “Coach (Mike) Martin was amazing. I learned so much about being a competitor and being a leader when not playing much. It was an amazing opportunity. I benefited greatly mentally and physically.”

He said he didn’t know he needed the surgery until late in the basketball season.

He explained, “Playing basketball let me know I needed it. If I just took time off and recovered on my own, it could have set me back further.”

The Perrys have a long tradition of playing 1-AA football and also dabbling in college basketball. Uncles James (Brown), Tim (Harvard) and John (UNH) all did it.

E.J.’s junior season on the gridiron rivaled what James did as an Ivy League champion and three-time, first-team All-Ivy quarterback.

He even broke his uncle’s 20-year-old school mark for total offense and later set the Ivy League mark with a national Division 1-AA leading 367.8 yards a game.

Just like under his father, E.J. Perry III at Andover High, he put up pinball-type numbers.

Perry said, “Everyone tells me how great a season I had, but we have a lot of work ahead of us. We have to turn those close losses into wins. I had zero expectations. I wanted to work every day to become a starter and a leader.”

He listed his part in the two wins as the major highlights.

In the season opener vs. Bryant, he delivered the win for his uncle in his Brown head coaching debut. And against the Bryant team James coached the previous two seasons. E.J.’s 94-yard TD run with 6:04 left was the big play in the game.

Then in the second-to-last game, Perry accounted for four TDs as the Bears ended their 20-game Ivy League losing streak with a 48-24 win at Columbia.

E.J. sheepishly admitted his coach gave him an earful during the Bryant game. After his long touchdown run, he let his emotions get the best of him and flung the ball to a fan in the endzone. OK, not just any fan. His younger brother Will Perry!