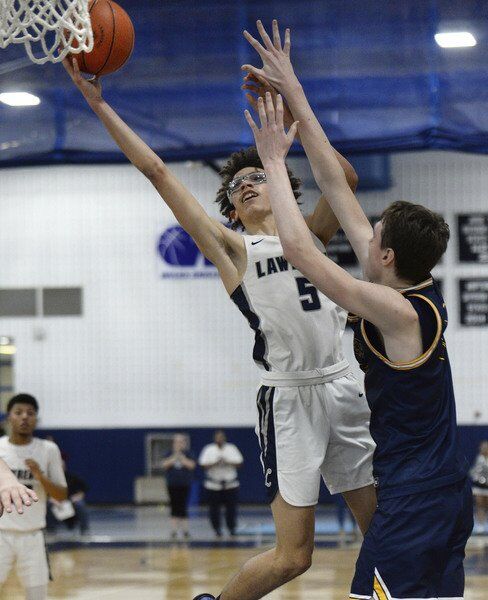 CARL RUSSO/Staff PhotoAndover’s Aidan Cammann goes up for the block as Lawrence’s Jeremiah Melendez drives for a layup in action last year. 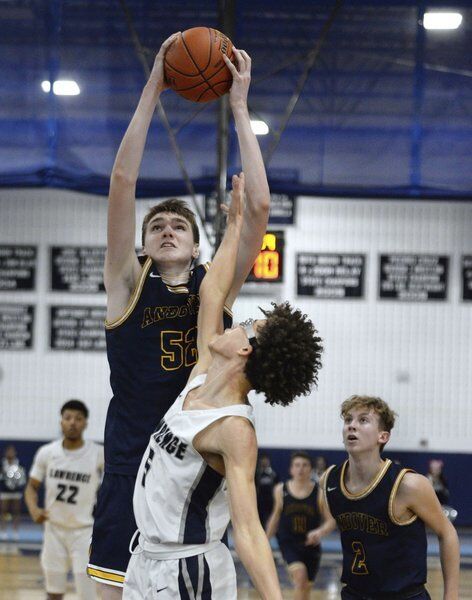 CARL RUSSO/Staff PhotoAndover’s Aidan Cammann goes up for the block as Lawrence’s Jeremiah Melendez drives for a layup in action last year.

Aidan Cammann finally got some live competition over the last month.

The solo workouts, which had been pretty much the norm for the Andover High rising junior hoops superstar over the last four months, were getting monotonous and stale.

So, when his AAU team, the Middlesex Magic, opened game player with a pair of games in Derry, N.H., he relished the opportunity.

“I’m just happy to be on the court,” said the 6-foot-8 Cammann. “It’s good to have some real competition.”

Cammann hadn’t exactly been wasting his time while waiting for game action. He was doing his best to keep his conditioning at a high level and has been taking a ton of shots while working on a perceived weakness.

“I’ve never felt comfortable driving to the basket — I’ve always relied on my shot — so that’s something I’m working on more,” said Cammann.

Actually, Cammann was becoming a bit more comfortable going to the basket by the end of last year, when he came on strong near the end of the season and finished his sophomore season averaging 13.7 points a game.

“Aidan’s improvement from his freshman to sophomore year has been amazing and he’s made great improvement this year,” said Fazio. “He’s bigger, stronger and more confident. He’s going to have a miraculous season next year ... if we have a season.”

Cammann agrees that his confidence has risen, and believes that has helped take his offensive potential to a new level.

“Probably my biggest (improvement) is my confidence in my ability to score in different situations, whether down low or up top,” he says.

Although he still has two years of high school ball remaining, Fazio already believes that Cammann, “Will be the best big guy we’ve ever had, and we’ve had some good ones like Matt Gibson and Corry McLaughlin.”

With his size and steady development, it would not be surprising for Cammann to be enticed by prep schools eager to lure him away from Andover, and he’s had a few make appealing inquiries. But he’s not interested.

“I’d never leave Faz,” said Cammann, who has been attending Fazio’s Hooptown summer camp since the third grade. “He’s just such a great coach. He can pull a team together no matter what.”

If Cammann isn’t leaving Andover anytime soon, he’ll eventually be off to college, of course, and it’s almost a slam dunk that he’ll be playing Division 1 basketball at the next level. In fact, last month he received his first offer, from Division 1 Merrimack coach Joe Gallo on the first day allowable according to NCAA regulations.

“That was a little bit of a shock but I’ve been to the Merrimack camp and he (Gallo) knows me,” said Cammann.

“It felt good ... I’ve always had it as a goal to play in college, really for as long as I can remember. I don’t have any place in particular in mind. I just want to play at the highest level I can and feel comfortable wherever I go.”

If he keeps progressing, Cammann should have plenty of options along those lines.

Although Aidan Cammann is the tallest person in his family, there is a background of height. His father, Casey, is 6-foot-7 and played basketball at Yale. Mom Erin is 6-feet, older sister Emma is 6-1 and older brother Conor is 6-3. Emma and Conor were both swimmers.

As for Aidan, who claims he has grown in the last few months to 6-8 1/2, he wants “to get as tall as I can” and is hopeful that another inch or two is coming.