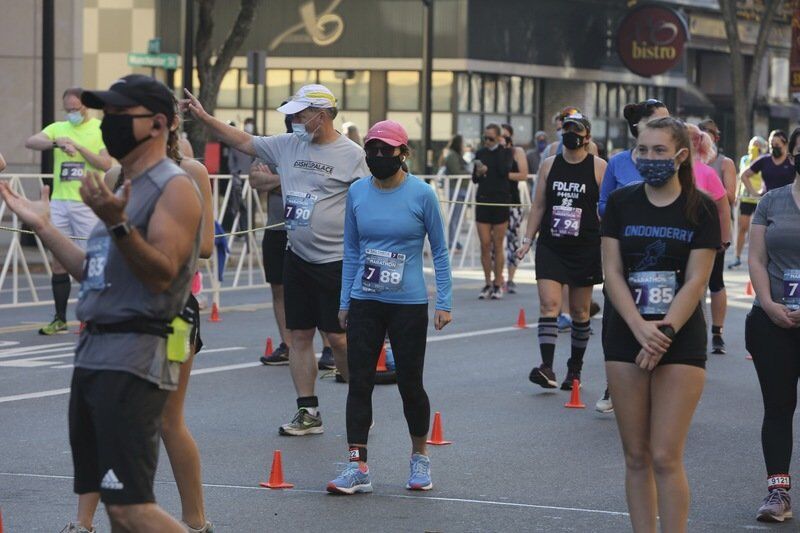 Courtesy PhotoAndover’s Chiuying Lu, middle, is all business before running the first leg of the two-person relay at the 2020 Manchester City Half Marathon. 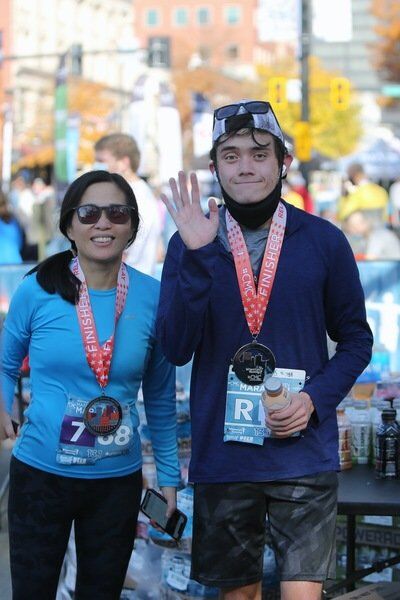 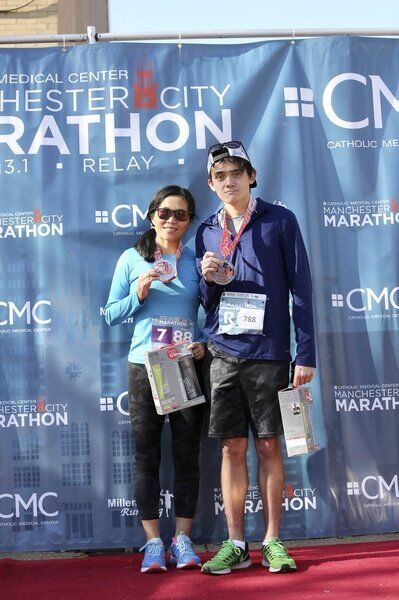 Courtesy PhotoAndover’s Chiuying Lu and her son Isaac Heitmann pose after winning the 2020 Manchester City Half Marathon two-person relay earlier this month. Heitmann is a junior at Phillips Academy, while Lu is an amateur runner.

Courtesy PhotoAndover’s Chiuying Lu, middle, is all business before running the first leg of the two-person relay at the 2020 Manchester City Half Marathon.

Courtesy PhotoAndover’s Chiuying Lu and her son Isaac Heitmann pose after winning the 2020 Manchester City Half Marathon two-person relay earlier this month. Heitmann is a junior at Phillips Academy, while Lu is an amateur runner.

For Andover’s Isaac Heitmann, running is a true passion, a sanctuary from an increasingly complicated world.

“Long distance running does a lot to clear my head,” said the Phillips Academy junior. “The constant breathing, combined with a shift in mental focus often takes my mind away from the challenges I’m facing.”

For his mother, Chiuying Lu, growing up in Taiwan, running — and just anything athletic — was something she did her best to avoid.

“I was terrible at sports growing up,” said Lu. “I couldn’t jump high or run fast. In gym class, I always kicked over the hurdles. Now, nothing is better than sharing your passion with your child.”

Together, the mother and son delivered a gold medal effort earlier this month.

The Manchester Marathon was one of the few marathons to be run in person, not virtually.

“There definitely was some worry about contracting the coronavirus, since so many people were participating in the actual race,” said Heitmann. “But the race organizers did a terrific job. We heard that the race would have a lot of elite runners participating, so the win was definitely an unexpected victory.”

Lu was quick to credit her son for the win.

“Running the second leg with excellent efforts and speed (6:55 per mile for 8.3 miles), Isaac made our winning possible. I’m a proud mom!” she said.

Growing up on an island off the coast of Taiwan, sports were rarely a part of Lu’s life.

“I never had a chance to learn to swim until very recently because my island was once a war zone,” she said. “There were land mines buried on the beaches to prevent any foreign army’s invasion.”

As an adult, Lu became a reporter for various media outlets in Taiwan, a career that led her to America.

“I came to Boston to pursue my graduate degree at Emerson College in my late 20s,” she said. “During the first month of the first semester, I met my husband Chris and my whole life changed.”

After welcoming Isaac, chasing after her young child led Lu into running.

“About seven years ago, during walks around Lake Quannapowitt (in Wakefield), my husband and I decided to pick up our pace to catch up to Isaac on his bike,” she remembered. “The first couple of months I was awfully slow and had to walk most of the time. Eventually I was able to finish running the whole lake. A few months later, I ran a 10K race at Ipswich.”

Lu’s newfound love sparked the same passion in her son.

“I’ve been running ever since sixth grade, and my mom was the one who inspired all of it,” said Heitmann, who runs track and cross country at Phillips Academy. “I remember I was sedentary as a kid, before my mom inspired me.”

Both mother and son thought long and hard before deciding to run in Manchester.

“We took a long time to evaluate and decide if we wanted to participate,” said Lu. “Most of my family and friends still live in Taiwan, which had one of the fastest and most effective responses to COVID-19 in the entire world. I’ve learned how important masks and distancing are. We strongly felt that (Manchester) would be safe.”

The win, however, became a very pleasant surprise.

“I pretty much had no idea we could win, and I don’t think mom did either,” said Heitmann, who ran the second leg. “That was probably the reason why taking first place was so exciting. It definitely means a lot that we did this together.”

“The relay was the first time Isaac and I have ever won a race together so I was jumping up and down screaming,” said Lu. “It means so much to me to run with my son, and the opportunity to run as a team was one of the best experiences I’ve ever had.”

Isaac Heitmann was off to a strong start to his career at Phillips Academy, prior to COVID-19 shutting down sports.

The family moved from Lynnfield to Andover during his sophomore year to be closer to Phillips.