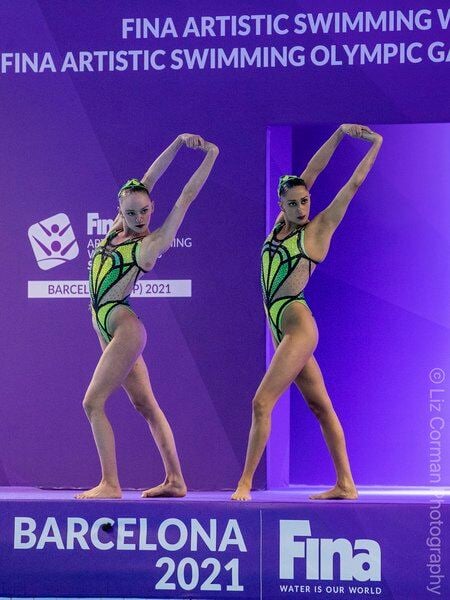 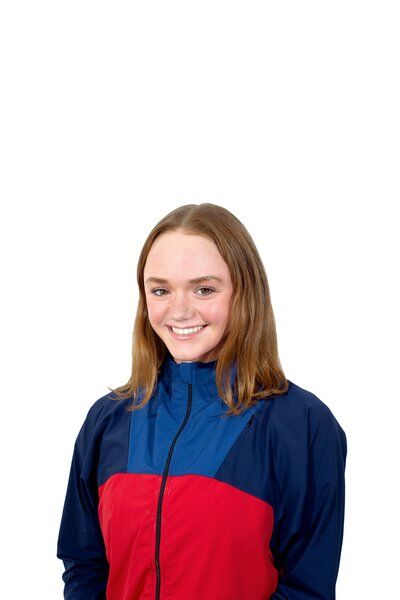 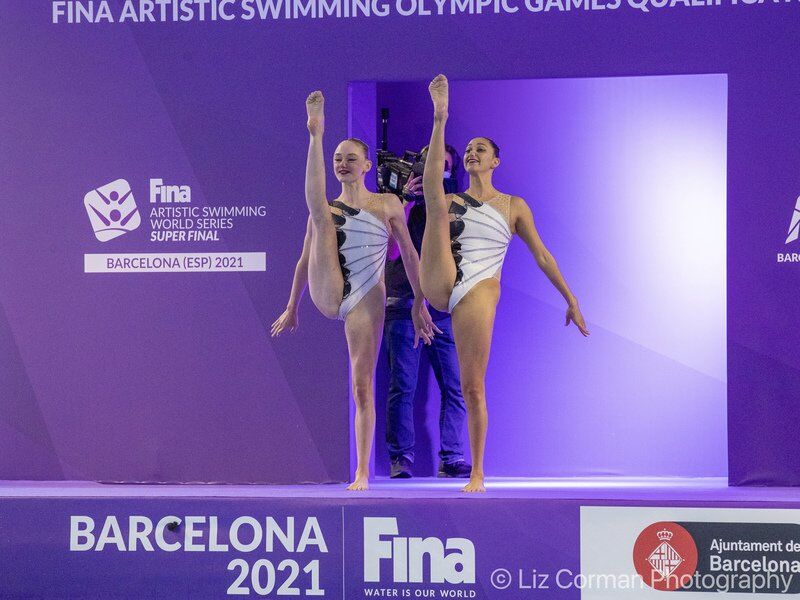 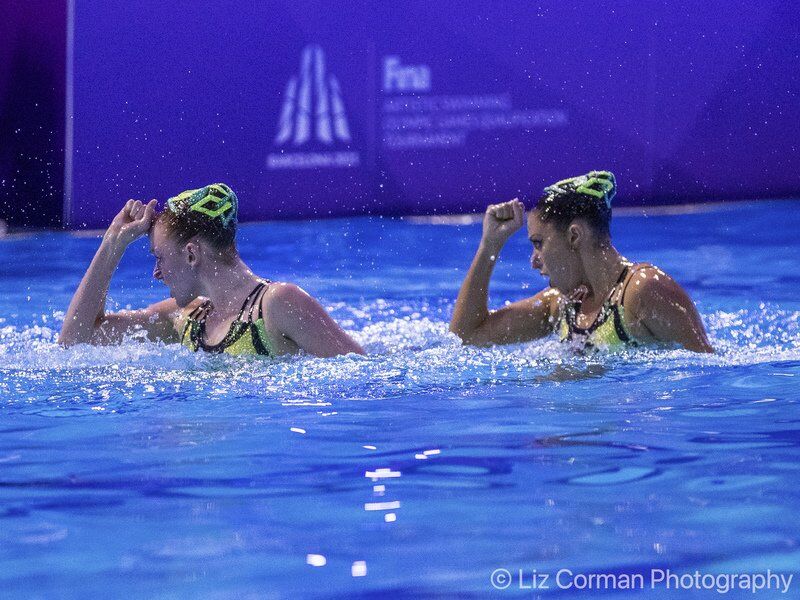 Liz Corman Photography/Courtesy of USA Artistic SwimAndover’s Lindi Schroeder, left, and teammate Anita Alvarez go through their routine in the artistic swimming duet, on their way to earning a spot in the Olympics. 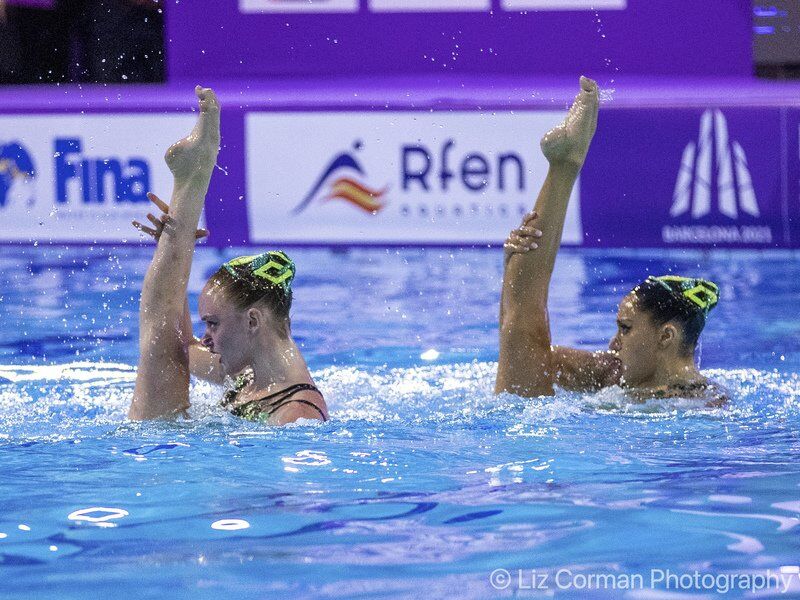 Liz Corman Photography/Courtesy of USA Artistic SwimAndover’s Lindi Schroeder, left, and teammate Anita Alvarez of New York perform in the artistic swimming duet. The duo will represent the United States at the Olympics in Tokyo.

Liz Corman Photography/Courtesy of USA Artistic SwimAndover’s Lindi Schroeder, left, and teammate Anita Alvarez go through their routine in the artistic swimming duet, on their way to earning a spot in the Olympics.

Liz Corman Photography/Courtesy of USA Artistic SwimAndover’s Lindi Schroeder, left, and teammate Anita Alvarez of New York perform in the artistic swimming duet. The duo will represent the United States at the Olympics in Tokyo.

The Olympic dream is about to become a reality for Andover’s Lindi Schroeder.

In just a matter of weeks, Schroeder will board a plane to Tokyo, Japan, to fulfill the ambition of countless athletes for more than century — competing in the Olympic Games.

“I’m tremendously excited,” said Schroeder. “These games are very special, as they are taking place in a pandemic. I’m honored to take part in an event that brings the world together.”

Schroeder and teammate Anita Alvarez of New York are the only two athletes from the United States who will compete in artistic swimming — formerly known as synchronized swimming — at the 2021 Summer Olympics, which run from July 23-Aug 8. Artistic swimming competitions will be Aug. 2-7, according to Nbcolympics.com.

The 19-year-old Schroeder and Alvarez will compete in the two-person “artistic swimming duet.” They punched their ticked to Tokyo on June 13 by placing fifth at the FINA Olympic Games Artistic Swimming Qualification Tournament in Barcelona. That was after they won the title at the Artistic Swimming World Series in May.

“I found out that we qualified in the duet when our scores were announced, and I could see our placement on the scoreboard. I was so happy with this result, but I also then allowed myself to process the other emotions from the rest of the week. We are very excited.”

Schroeder found her way to artistic swimming — also called “Synchro” — as a young child by accident.

“I began synchro when I was 5-years-old,” she said. “I didn’t want to do swim lessons anymore, but my parents wanted me to be more comfortable in deep water. We decided to see if I liked synchro. I took part in the novice program for two years before advancing to the 10-and-under age group.”

In just a few short years, Schroeder found herself swimming with the best in the United States.

“In 2012, I made my first US National Team at the 11-12 level,” she said. “We trained that summer at the United States Olympic Training Center in Colorado Springs, while the Olympics were taking place. It was then that I began to understand what the Olympics were and what being an Olympian meant.

For years, Schroeder has competed with Team USA at many of the many of the sports’ most prestigious events.

“In 2019, I competed in the FINA World Championships and the Pan-American Games. In the fall of 2019, I was named to the Olympic duet. I competed in duet and team at the French Open in 2020 before (COVID-19) lockdown began. This year, I’ve competed in two virtual World Series events, and at the Olympic Qualifier.”

Schroeder’s primary club coach has been Svetlana Malinovskaya of Optima Synchro, which is based out of Haverhill and Lawrence. The Stanford-bound Schroeder attended Phillips Academy before turning to online learning.

“In the fall of 2018, I decided to move to California to train full-time with the Senior National Team,” she said. “We typically trained from 7 a.m. to 3 p.m. We spend the first hour of the day on land doing strength or flexibility work, and we spend the rest of the day in the water. We use speed swimming combined with breath holding for cardio and spend many hours on technique and matching all of our movements.”

Adding to the challenges is working in tandem with one or more teammates in the pool.

“Synchro is a very demanding sport, both physically and mentally,” said Schroeder. “Physically, it takes strength, flexibility, agility, endurance and mobility. You have to have the ability to learn and memorize movements quickly, and also be able to focus every second on a different movement.

“Like any elite athlete, you have to be motivated, resilient, and have to handle pressure well. I believe that my strength is how I respond to and perform well under pressure.”

What is ‘Duet artistic swimming?’

Andover’s Lindi Schroeder and partner Anita Alvarez will compete in duet artistic swimming — formerly known as synchronized swimming — at the 2021 Tokyo Olympics. They will compete with a technical routine, which has a number of required elements, and a free routine.

Swimming.org defined artistic swimming as, “athletic movements performed in water and choreographed, needing rhythm and flair to synchronize and interpret the music.”

Rules for the sport include (according to swimming.org):

— No touching the bottom of the pool.

— No jewelery or theatrical makeup.