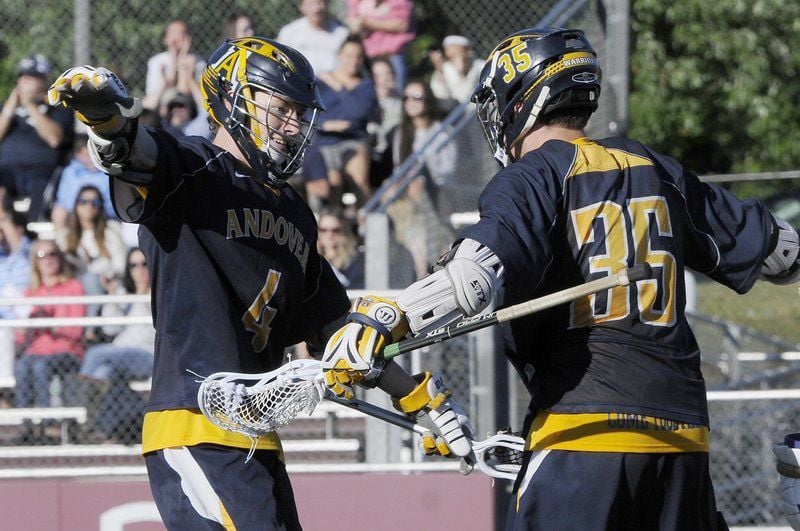 TIM JEAN/Staff photoAndover's Shamus Florio, left, celebrates with Brett Miller after he scored a goal against Acton-Boxboro in the Division 1 North final. The Golden Warriors fell 9-4. 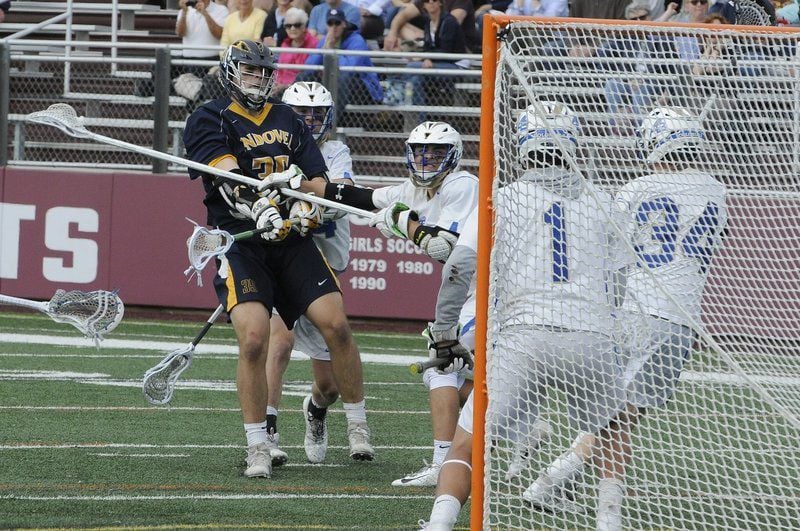 TIM JEAN/Staff photoAndover's Brett Miller shoots toward the net against Acton-Boxboro in the Division 1 North final. The Warriors fell 9-4.

TIM JEAN/Staff photoAndover's Shamus Florio, left, celebrates with Brett Miller after he scored a goal against Acton-Boxboro in the Division 1 North final. The Golden Warriors fell 9-4.

TIM JEAN/Staff photoAndover's Brett Miller shoots toward the net against Acton-Boxboro in the Division 1 North final. The Warriors fell 9-4.

This will be a year to remember for Andover lacrosse. It ended abruptly — as it usually does — with a 9-4 loss to perennial power Acton-Boxboro in last Friday’s Division 1 North Final.

“You don’t make it to this point in the year without making that hard work happen,” said Andover coach Wayne Puglisi. “The sacrifices, the hard work, the time put into prep, I mean, it’s all part of it. And our team had a great year.”

For a half, it looked like the Warriors could get it done. Acton-Boxboro’s Mike Goodwin scored the first goal of the game at the 4:40 mark of the first quarter, but Bret Miller and Sager Florio ended the quarter with tallies to put Andover up 2-1.

Junior Alex Trottier made it 7-4 early in the fourth, but the Colonials capitalized for two more goals and held possession for most of the final 12 minutes.

“I honestly didn’t think we would get here at the beginning of the year,” said senior Mitchell.

For a time, it seemed as if Andover was on the verge of stealing momentum with the Division 1 North title on the line.

With the Golden Warriors trailing 1-0, the team of Elia Petros and Anna Higgins stormed to a dominant victory at No. 2 doubles, handing their teammates a spark and sending fans into massive cheers.

That, however, would be as good as it would get for Andover.

The No. 2 Golden Warriors could not muster another win, falling to top-seeded, undefeated Acton-Boxboro 4-1 in the Division 1 North championship last Tuesday.

“I’m so proud of out team,” said Andover coach Alan Hibino. “Elia is our captain and the only senior in our lineup. She was coming off graduation and the all-night senior safari and she was able to pull it together. And Anna was great again.

“I feel like we met or exceeded our expectations for this spring. But it’s always sad when you fall a few rounds short of your goals. Our goal, in my eyes, is always to win the state title. We will start work now and set our goals to be the last team standing next spring.”

Despite three goals by Lily Shannon, Andover fell to Chelmsford 13-8 in the Division 1 North quarterfinals on June 6. Jordan Torres and Emma Farnham scored two goals each and Abi Tavenner scored once for the Warriors, who finished 14-8.

Emma Farnham scored four goals as Andover beat Winchester 13-8 in the Division 1 North first round on June 4. Brooke Lenes and Jordan Torres each scored three times, Abi Tavenner scored twice and Mackenzie Evans had one goal for the winners.

Heartbreak on the diamond

Andover jumped out to a seven-run lead, but the Warriors could not hold on and fell to Waltham 9-8 in the Division 1 North first round last Tuesday.

Patrick McConnell led Andover with two hits and three RBIs, Matt Potts was 3 for 4 with two runs and an RBI, Cedric Gillette scored two runs and Mike Reilly had two hits and drove in a run for the Warriors, who finished the season 13-8.

“Things happen in baseball,” said Andover High coach Dan Grams. “You look great. Everything is in place. And then everything falls apart.”