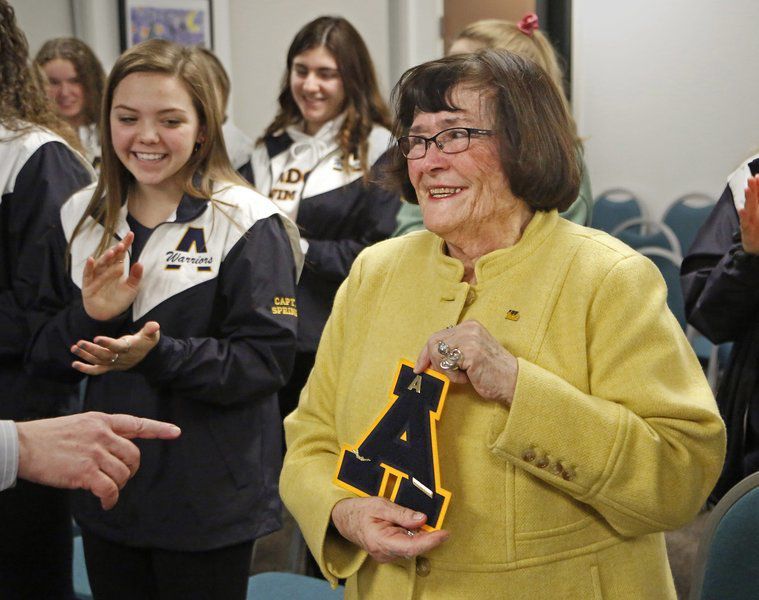 MIKE SPRINGER/Staff photo Retiring Andover High School girls swimming and diving head coach Mariln Fitzgerald holds up the varsity letter she recieved during the Andover School Committee meeting Thursday night. Applauding at left is 2018 team co-captain Riley Spring. Behind her are teammates Rebecca Page, left, and Samira Sayan. During her career as coach, Andover won 18 out of the last 19 state championships, including 2018. 1/10/2019 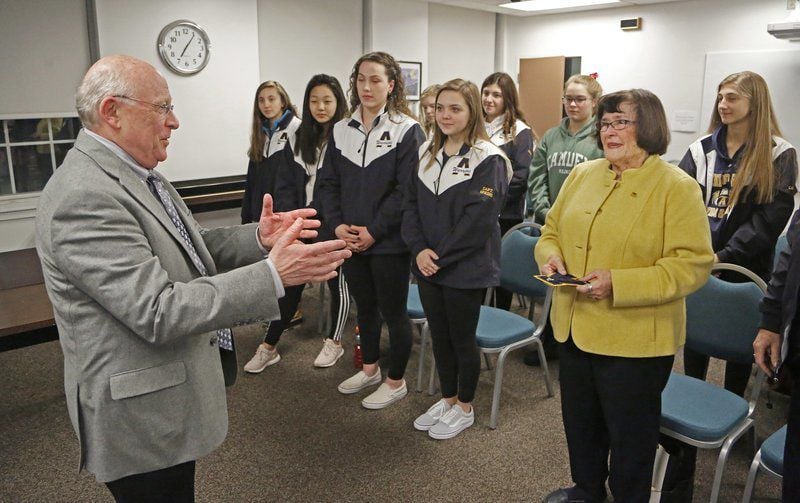 MIKE SPRINGER/Staff photo Retiring Andover High School girls swimming and diving head coach Mariln Fitzgerald holds up the varsity letter she recieved during the Andover School Committee meeting Thursday night. Applauding at left is 2018 team co-captain Riley Spring. Behind her are teammates Rebecca Page, left, and Samira Sayan. During her career as coach, Andover won 18 out of the last 19 state championships, including 2018. 1/10/2019

When Marilyn Fitzgerald was a student at Andover High School, there was not a single varsity sport for girls. If you wanted to obtain a varsity letter you had one choice: Become a cheerleader.

And that it was she did.

"I not only wanted the varsity letter, I also really wanted to be a cheerleader," she said. "I hope that (the girl's) varsity letters, when I give it to them, means as much to them as me getting one for cheering did."

Fitzgerald still holds onto the original certificate stating she earned a varsity letter when she was a high school cheerleader in 1958. Now, that collection grows to two, as she accepted a varsity letter from Superintendent Sheldon Berman last Thursday night for her historic coaching career with the Andover Girls Swim and Dive Team.

Surrounded by 11 seniors from her undefeated team sporting their Andover swim gear, as well as coaches Becky Pierce and Patty Barrett, Fitzgerald, to her surprise, accepted a varsity letter at the School Committee meeting.

"It was so considerate," she said. "I felt really honored that they cared enough to remember that story and to honor me like that. I was emotional."

Fitzgerald said the new varsity letter will be framed and join all of her other swim memorabilia in her famous "swim room" in her home. She said the room is solely filled with swim-related things such as awards, records, and newspaper clippings. The room is also home to her famous index cards, which she said were her keys to success. Fitzgerald admits to having more than 400 index cards, one for each athlete she has ever coached, which includes information such as name, birthday, an initial grade on their strokes given in their freshman year, and other details.

Fitzgerald, who announced her retirement at the annual swim and dive banquet in December, led the team to a perfect season at 16-0 following 60 consecutive wins. Under Fitzgerald's leadership, the team has won 18 out of the last 19 state championships.

The fall 2019 swim season will be the first time she will not be on deck to greet the team since 1992. In an emotional announcement at the fall banquet, she said she knew in July this would be her final season with the team.

Former co-captain and AHS senior Sydney Ho recounted the time Fitzgerald granted her the first varsity letter of her diving career, and the excitement she felt.

"Being able to stand by (Fitzgerald's) side tonight as she received her varsity letter made me feel all of those emotions again," she said.

For those Fitzgerald has coached at the varsity level, they know the significance and hard work that is depicted by a varsity letter.

Former co-captain and AHS senior Zoe Nepomnayshy said being able to give her coach a varsity letter was "gratifying," and a way to give back following the hard work and commitment Fitzgerald has invested into the team over the years.

"She always tells us to take our being a part of this varsity team with pride and appreciation," Nepomnayshy said. "All of the good qualities and values that she teaches us and gives us through our years on the team goes into that varsity letter we each get."

Riley Spring, Fitzgerald's granddaughter and former co-captain, said Fitzgerald showed them what an honor it is to be a member of that team and what being on a varsity sport really entails. She was taught the definition of hard work as well as many life lessons alongside her grandmother on the pool deck.

"But that didn't mean she was any easier on me at practice," Spring said. "I think we both knew secretly she pushed me a little harder."

Though Fitzgerald's coaching career has come to a close after 27 years, the girls on her team realize that her legacy will live on. Ho said Fitzgerald has not only affected the team, but the entire town of Andover.

"She's going to go down in history as the most successful coach the team has ever seen and that's definitely something to be proud of," said former co-captain and AHS senior Jordan Clements. "I think the varsity letter did just that."