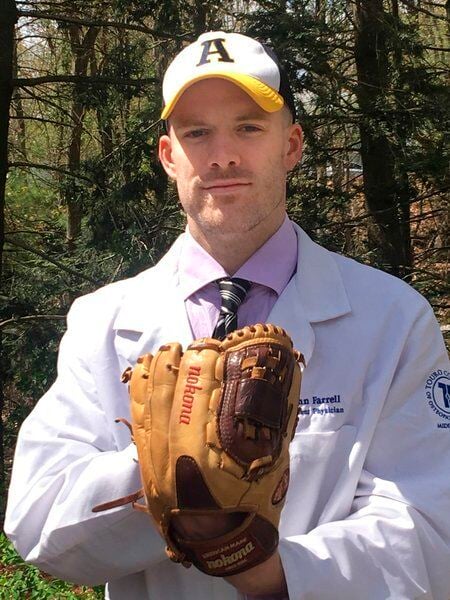 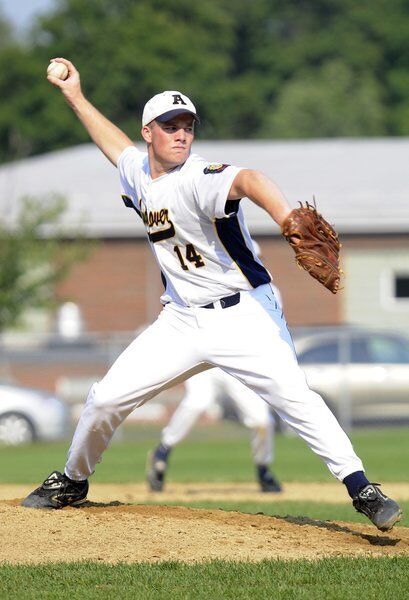 Tim Jean/Staff File PhotoOne of the area's top power pitchers during his reign, former Andover High star John Farrell went on to become a star at William & Mary before being drafted in 2013.

Tim Jean/Staff File PhotoOne of the area's top power pitchers during his reign, former Andover High star John Farrell went on to become a star at William & Mary before being drafted in 2013.

It was the summer of 2013. John Farrell had fulfilled a dream, becoming a pro baseball player for the Hudson Valley Renegades, the New York-Penn League affiliate of the Tampa Bay Rays, a few months after an All-American season at William & Mary and the Major League Baseball Draft (21st round).

Then he realized how much he loved baseball.

One of the hardest throwing high schoolers of his era, topping 90 miles per hour, the former Andover High sensation had big plans when it came to baseball.

“I loved the impact on the game that a pitcher has,” said Farrell, now 29. “That’s what drove me. I loved pitching. Love it. My dad (John Sr.) had worked a lot with me until he couldn’t really catch me anymore.”

But there was an asterisk to that season. His mother, Laurie, came down with breast cancer.

“They told me before I left, that she had breast cancer, and it was going to eventually kill her,” recalled Farrell. “It was always in the back of mind and front of my mind.

“For me, I learned pretty quickly that while baseball was something I loved, it was not what I wanted to do, sacrifice being away from family.”

So after the season, he let the Tampa Bay Devil Rays know that he would not be returning so that he could be with his family and possibly pursue a career in the medical field.

“I grew up with a couple of aunts, one a pediatrician and another an oncologist, and a family friend who was an anesthesiologist, and I was struck by how they impacted lives in a positive way,” said Farrell.

“And we were around a lot of doctors with my mom,” said Farrell. “I think I was driven to the field.”

He took a year off after baseball to focus on applying to medical schools.

He went to Touro College in Middletown, N.Y. and got his Master’s degree. He was able to attend Touro’s med school due to having over a 3.5 GPA.

He graduated on May 19 via a virtual graduation. He begins his residency at UMass Medical Center in Boylston, Mass on July 1.

One downer was that his mother, Laurie, passed away in 2016 when he started med school.

“She was an incredible mother,” said Farrell, who also has an older sister, Kelsey (33). “We were a close family. And it was the right thing to do, to be together. I will cherish the time we spent together after my baseball career.”

Farrell still reminisces about the game and his memories, particularly playing in Andover.

“It came very natural for me,” he said. “I had a live arm and could throw it pretty hard in high school and started getting attention from colleges and scouts.”

Playing for Andover High, on some pretty good teams, remains a highlight in his career.

“We had great teams my junior and senior year,” recalled Farrell. “We had another pitcher, Sean Carlson, who was also getting a lot of looks from colleges. We had a nice thing going, he and I.

“We also had John Hennessey, who was a very good shortstop,” said Farrell. “And our Legion teams were great with Joe Iarrobino, giving us a chance to play with (current San Francisco Giants star) Mike Yastrzemski and Zach Burdeau, guys who went to private schools. We were very good that last summer, losing to the team that won the state title.”

Farrell has found his niche in medicine.

While doing some shifts as a med student, he was helping when the COVID-19 virus was in its early stages.

“This is what I love doing,” said Farrell. “I thought it was baseball, initially. But this is what I was meant to do.”

Andover’s John Farrell, the Merrimack Valley Conference MVP as a senior at Andover High, showed the MVC what it’s like to face the next level, as in Division 1 college baseball. Farrell followed up a sweet junior campaign with an even better senior year. He sported one of the area’s most unhittable fastballs, which regularly topped 90 miles per hour and topped out at 94 mph according to many radar guns.

As a senior, Farrell posted a dazzling ERA of 0.70, allowing only one unearned run over his last four starts. He struck out an area-high 94 batters in just 60 innings while walking only 15 batters. He struck out 17 North Andover batters in a huge win in the Lawrence Tournament to end the regular season.

He received a scholarship to pitch at William & Mary and became an All-American as a senior, with a stellar 11-3 record. He was drafted by the Tampa Bay Rays in 2013.