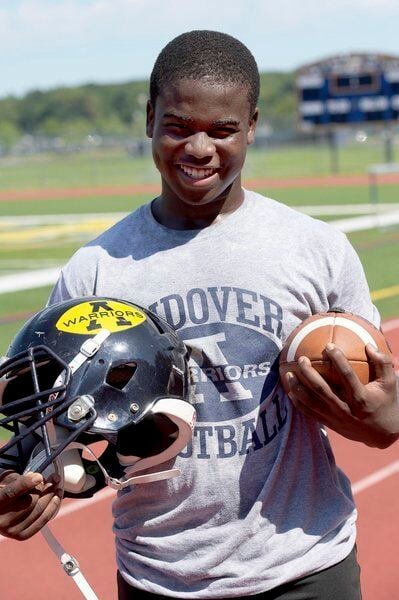 TIM JEAN/Staff photoAndover incoming freshman Sammy Joseph hopes to be a force on the football field this season. 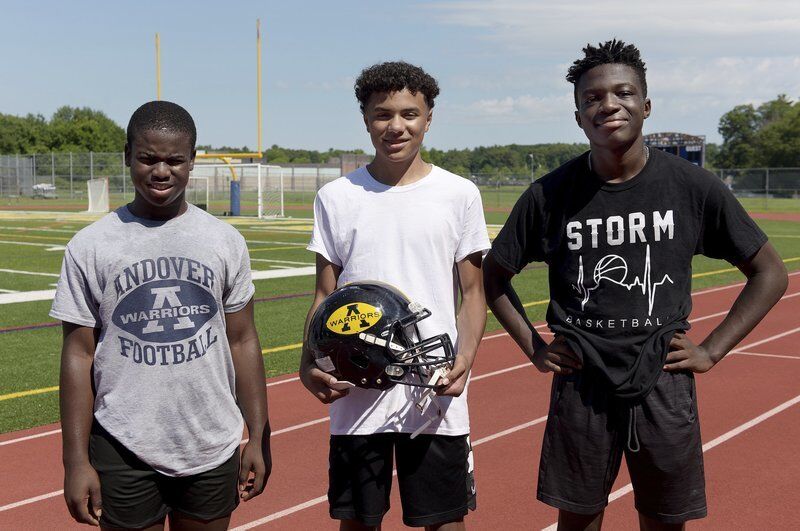 TIM JEAN/Staff photoAndover incoming freshman Sammy Joseph, left, Will Tutwiler, and Chris Dessin, right, hope to be a force on the football field this season. Tutwiler and Dessin are also exceptional basketball players.

TIM JEAN/Staff photoAndover incoming freshman Sammy Joseph hopes to be a force on the football field this season.

TIM JEAN/Staff photoAndover incoming freshman Sammy Joseph, left, Will Tutwiler, and Chris Dessin, right, hope to be a force on the football field this season. Tutwiler and Dessin are also exceptional basketball players.

A year after his mother passed away, and eight years after his father died, Joseph came from the Miami, Fla., area to live with his uncle, Arold Bien-Aime, an attorney who lived in Everett at the time.

An avid football player, who began playing when he was 5-years-old, the 5-foot-5, 175-pound Joseph was worried about his future on the gridiron and, by moving, everything he was leaving behind.

“I wasn’t looking forward to moving,” said Joseph, who plays running back and linebacker. “I loved Florida, I loved my friends and I loved playing football there.”

Fortunately for Joseph, moving to football crazed Everett. The town has a great tradition on the gridiron, not only on the high school level but also on the youth level. He quickly fit in as the top running back on an excellent eighth grade team that won virtually all of its games.

“I liked it in Everett,” said Joseph. “The football wasn’t quite as good as in Florida, but it was pretty good.”

But for Joseph, who combines excellent speed with unusual strength for his age, life in Everett was only temporary.

After just six months there, back in December, Bien-Aime moved his family, along with Joseph, to Andover — another tough move.

“I knew if I stayed in Everett, I’d get a lot of notice from Division 1 schools,” said Joseph. “I didn’t know about Andover. But my uncle told me that if you’re good enough, they’ll find you.”

Joseph has been working out tirelessly this summer, enduring as many as three workouts per day. He runs, works on speed and agility and is obsessed with squats and — in particular — pushups.

For Everett, Joseph displayed both speed and hard-nosed running when carrying the ball. Of the two, he prefers the latter.

“I think I have natural instincts (as a running back) but I like to run over people,” said Joseph, who is a Baltimore Ravens fan and views Saquon Barkley as his model running back. “If I’m going against a defender, I’ll try to fake him out but I’m strong enough to run through him.”

Andover coach E.J. Perry thinks that Joseph will certainly be in the mix to be a starting running back for the Warriors — when the football season is hopefully played during “Fall II” in the early spring. That’s certainly what the confident Joseph is shooting for, but he’s aiming for far more than that.

“My goal is to get on varsity, be a starting running back and shoot for 1,500 yards,” said Joseph, who plans on also going out for Andover’s legendary track team — mainly to work on his speed for football, which is truly his main focus.

Explaining his love for the game, Joseph said: “Football is a comfort zone for me. I feel good when I’m playing, no matter what. I’m hoping to bring some Florida energy to the team.”