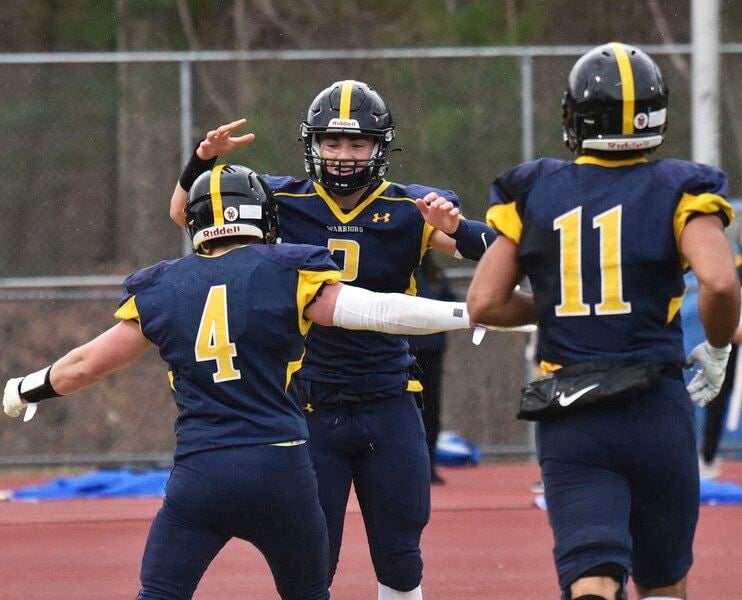 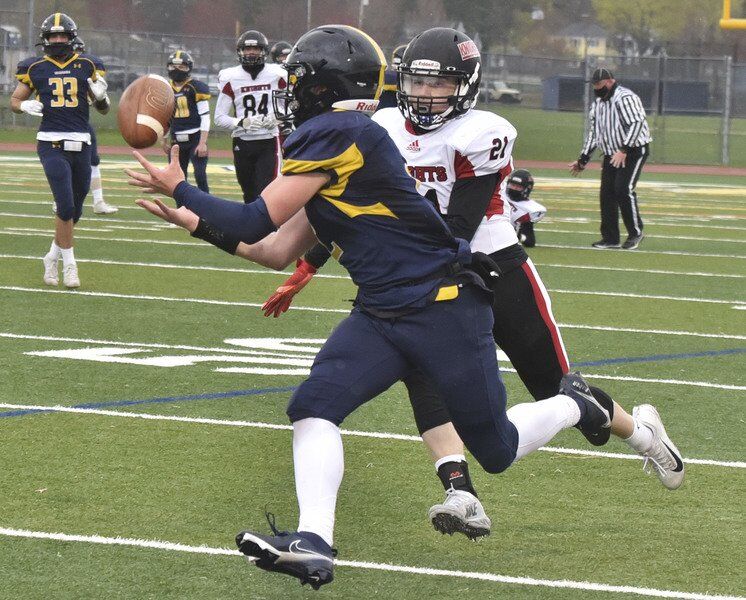 ANDOVER — As Zayn Aruri intercepted the pass 95 yards away from the opposing end zone, the Andover High senior had his doubts the play would end with his first career touchdown.

“I was reading the QB’s eyes and jumped the pass,” said Aruri. “I had a long way to go, but somehow I got in. I thought there was no chance I would get in, but I saw the open field and ran as fast as I could.”

Aruri’s 95-yard touchdown return, his second interception of the day, was the icing on the cake as Andover rolled past rival North Andover 38-0 last Thursday, in a game that was moved up a day due to inclement weather.

“North Andover is the team you want to beat when you play for Andover,” said Golden Warrior star Lincoln Beal. “We were so pumped. It’s always extra special to beat North Andover.”

Beal ran for one touchdown and caught a 61-yard TD from Scotty Brown in the first quarter, and Andover rolled to the win over their Thanksgiving Day rival.

“It means everything for us to beat North Andover,” said Aruri. “It’s a big rivalry. We were on our home field and got to have some fans in the stands, so it was great to go out and get a statement victory.”

After being shut out by rival Central Catholic a week ago, Andover’s offense was hitting on all cylinders on Thursday.

On the Golden Warriors’ second drive, Beal broke a 35-yard run, setting up his own 1-yard touchdown plunge.

Then, one play into Andover’s next drive — a play after a 55-yard Brown touchdown run was called back for holding — Beal hauled in a Brown pass and sprinted past the defense for his 61-yard score.

“That’s my favorite play, coming out of the backfield for a pass,” said Beal, who finished with 75 rushing yards and 66 receiving yards. “Scotty threw me a perfect pass, and I broke it. The whole week, our goal was to score points fast, and we did it today.”

Brown then chipped in with a big play with his legs, hitting the edge and breaking free for a 56-yard touchdown run with 2:40 until halftime. He then all but iced the victory with 8:42 left in the game, shaking two defenders and sliding in for a 7-yard TD. He finished with a game-high 137 rushing yards on 13 carries.

Aruri, who grabbed his first interception on the first play of the fourth quarter, added the game’s final highlight in the closing moments. He intercepted a pass at the 5-yard line, then seemed to dodge the entire North Andover offense on the way to his 95-yard score.

Aruri, a senior first-year starter, now has five interceptions on the season. He also had two picks in the season-opener against Methuen.

“Zayn’s play has been excellent,” said Andover coach EJ Perry. “He’s been tackling well and has been just overall great. He was coming off an injury, and it would have been tough for him to play in the fall, so I’m glad he had this opportunity.

“Lincoln, I think, is the best around. A lot of people are seeing what he does on both offense and defense. He’s a 15-years-old sophomore. When he matures, it’s going to be a big difference.”

Beal also had an interception, and Matt Rigazio had a pick that was disallowed by a roughing the passer penalty. Charlie Baillargeon had a sack and Connor Sheehan continued to star with 12 tackles.

The Golden Warriors will now close out the season by hosting Chelmsford on Thursday at 5 p.m.

“I think we’ve been getting better every week,” said Aruri. “We want to continue that trend. We want to have our best game of the season and finish strong.”