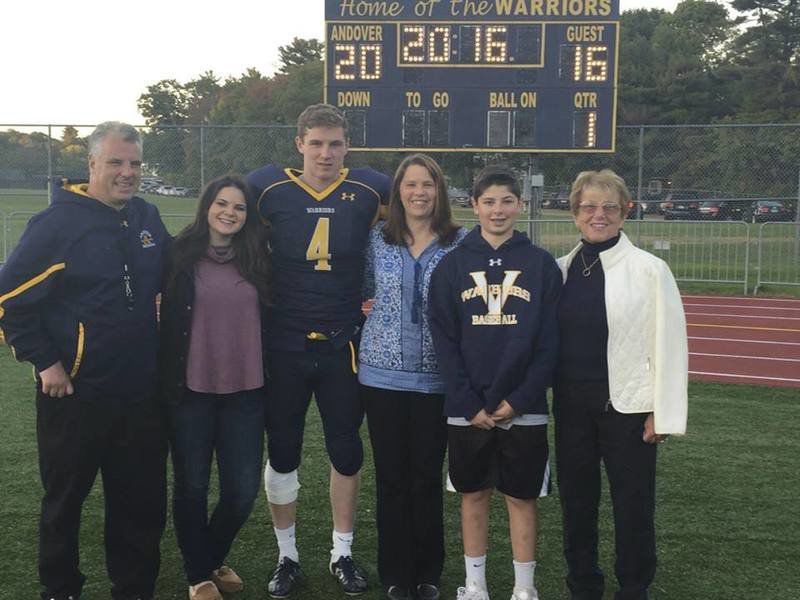 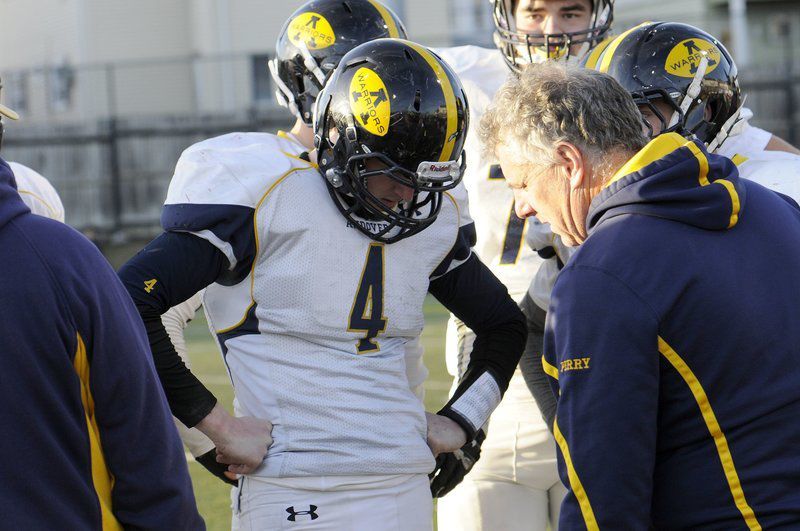 TIM JEAN/Staff PhotoAndover quarterback E.J. Perry IV is instructed by his coach and father, E.J. Perry III. The two took the field for the final time together on Thanksgiving.

TIM JEAN/Staff PhotoAndover quarterback E.J. Perry IV is instructed by his coach and father, E.J. Perry III. The two took the field for the final time together on Thanksgiving.

Several eras have now officially come to an end for E.J. Perry IV.

His seven-touchdown pass masterpiece on Thanksgiving marked not just his last football game for Andover High, it was also his finish high school sporting event, since he’s graduating early and will enroll at Boston College in January.

But the most bittersweet era ending for Perry IV is the player-coach relationship with his father, E.J. III.

And when the younger Perry says his father coached him, it was not just a father and son playing catch in the backyard. And it was in basketball, baseball and football.

“Some of it was intense,” said the 52-year-old coach, reflecting on a basketball game when young E.J. was in third grade. “It was probably difficult for him. We go hard all the time. I had to realize he was 8 or 9 at the time.”

The quarterback may go down as the greatest high school football player in Massachusetts history.

It was always going to be a difficult mix.

A driven coach, a gifted son, a legendary sports family, the highest profile position in sports, the dream of the big-time scholarship, the state and area records on the horizon, the jealousies and feuds of local sports.

“You’re trying to cope mentally and figure it out on your own. At that point, it’s tough to have that voice 24-7.”

E.J. III, an admittedly obsessive coach who has been a big winner in football, boys volleyball, boys basketball, girls basketball and even Little League baseball, struggled at times finding the right balance between coach and father.

They denied it at the time, but E.J. almost transferred to New Hampton prior to his junior season.

The father said, “He wanted Andover forever. But you start to think, ‘Is that proximity of coach-player becoming too close.’ He made the final decision.”

Did he coach his son differently than his other quarterbacks?

“That was my maturity,” he said. “And I don’t know if I’ll ever be mature. Freshman and sophomore year I coached similar to third and fourth grade (riding him hard). I had to take a step back. You can’t get more aggravated or yell at him more. It still trickled into the house, which my wife didn’t like.”

Young E.J. said of the father-son dynamic, “There have been a lot more pros than cons.”

Dad said, “These were the greatest four years of my life.”

They never beat archrival Central Catholic and didn’t get that elusive state title. This year’s club upset unbeaten Lexington in the Division 1 North quarterfinals and stunned powerhouse St. John’s Prep in the semis before taking it on the chin from Everett in the North finals.

Last year’s club lost a classic to Central Catholic in which E.J. threw for a state record 636 yards in a 49-41 North semifinal loss.

But beside a title, these last two years have been storybook. The first year-plus, though, were a challenge. Perry alternated in an up-and-down freshman year then his competition, sophomore Oliver Eberth, transferred to St. John’s Prep, where he became a star.

That fueled a lot of drama.

Young E.J. was quite candid on that freshman year experience.

He said, “We kind of struggled (6-5). There were a lot of whispers and sometimes a lot more than whispers. ‘He’s only playing because of his father.’

“You have to ignore it. People are going to say stuff. As an athlete, you need a short memory.”

From good to historically good

E.J. was promising as a freshman, excellent in an All-Star sophomore campaign and brilliant as a junior.

He’s been basically otherworldly this fall despite the defensively-challenged team finishing 6-5.

A curious gap in his game was his refusal to run, some of it due to injuries like a separated shoulder early in his junior year

And he’s played much more defensive back and has proven a natural there, too, including the game-saving play in OT against Lexington.

His father is known as a master motivator and he helped E.J. IV round out his game after the third game of this season.

The blonde bomber recalled, “He brought my uncle Matt (former Eagle-Tribune All-Star QB) and him to my grandmother’s house. They blasted me. This is what Uncle James (Malden Catholic and Brown Hall of Famer) would have been doing. You can’t be afraid.”

One drawback of coaching your son is, unlike the fans, E.J. III can’t just sit back and enjoy the show. And young E.J., with his cannon arm, pin-point accuracy and flair for the dramatic, usually puts on a show.

Dad said he occasionally gets to soak it all in. One special moment was in the record-breaking 2015 loss to archrival Central.

The Andover football, girls basketball and boys volleyball coach said, “There were two guys coming at him and he throws off his back foot for a 50-yard touchdown. I just thought, ‘How does anybody make that throw?’ You want to grab him and give him a high-5, but you have to coach the game.”

He also was in father mode at times against Lexington and St. John’s, two of the biggest Andover wins in the last 30-plus years after the club’s less than spectacular regular season.

The one constant for coach and quarterback was Kathleen Curtin Perry.

Young E.J. said of his mother, “She definitely holds the greatest role in my life. My dad has been coaching three seasons the last 10 years. He is busy. She’s the one who has done everything for me.”

Her husband, E.J. III, said, “After the Everett game, I just walked up to her with a smile and said, ‘You’re the most loyal person I’ve ever known. You always have my back.’

“During the nutty times she’ll say, ‘It’s a high school football game. There is a lot more to life.’ E.J. had the best of both worlds. She’s been the angel.”

As the daughter of late Hall of Fame Burlington High baseball coach Jim Curtin, Kathleen, a nurse, grew up around sports.

When she goes to a game, she announces to the nearby fans, “My husband is the coach and my son is the quarterback.”