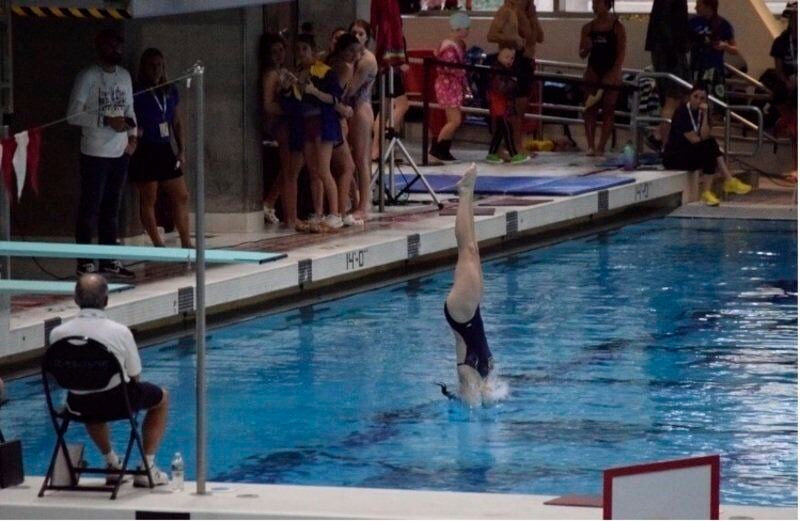 Courtesy PhotoAndover's Emme Pitts hits the water during a dive for Andover High. 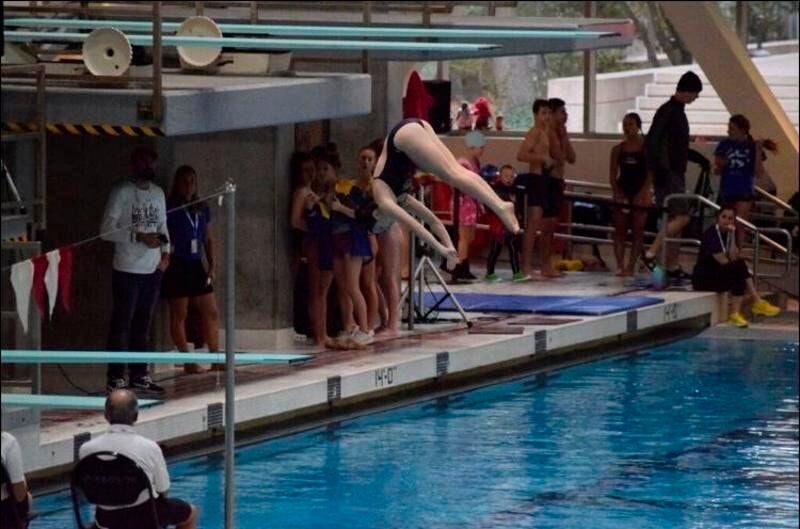 Courtesy PhotoAndover's Emme Pitts flies through the air mid-dive while competing for the Golden Warriors. 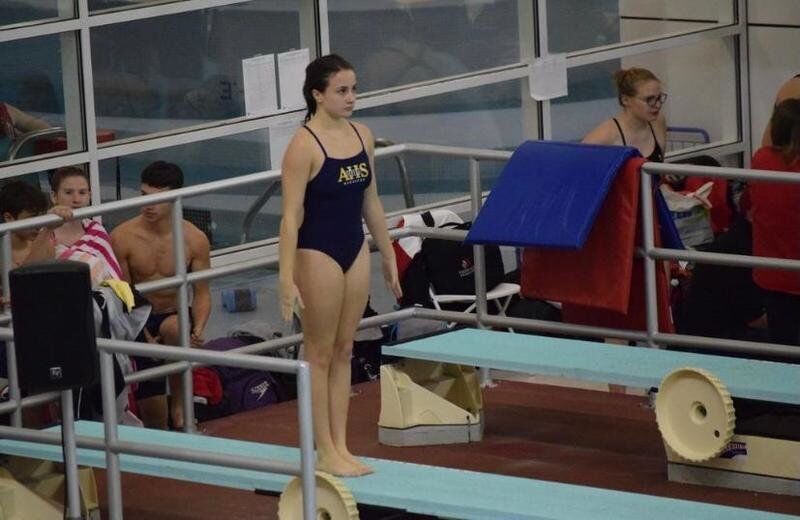 Courtesy PhotoAndover's Emme Pitts prepares for a dive. The senior tri-captain delivered an outstanding season in the pool and as a leader. 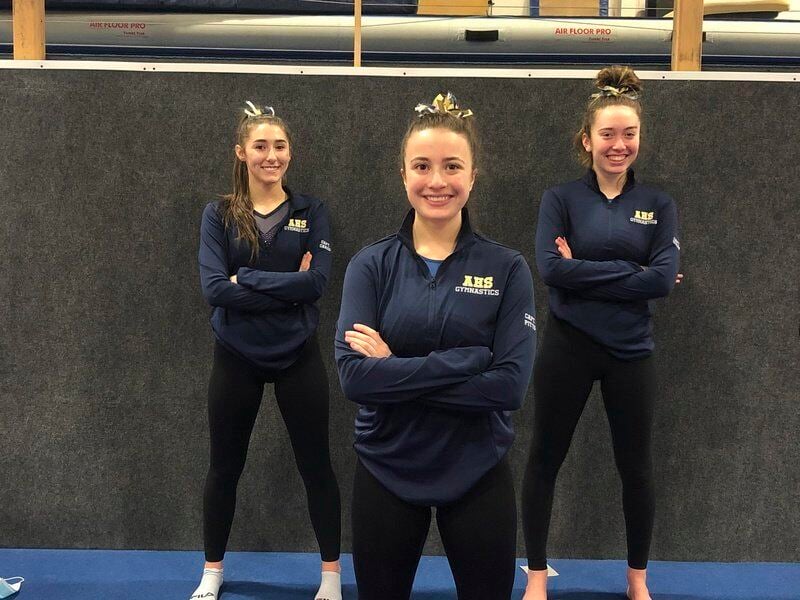 Courtesy PhotoAndover's Emme Pitts hits the water during a dive for Andover High.

Courtesy PhotoAndover's Emme Pitts flies through the air mid-dive while competing for the Golden Warriors.

Courtesy PhotoAndover's Emme Pitts prepares for a dive. The senior tri-captain delivered an outstanding season in the pool and as a leader.

For Andover High senior Emme Pitts, a perfectly-executed dive is close to an out-of-body experience.

“Diving is so much fun for me because, just for a few seconds, you are completely defying gravity,” said Pitts. “There is nothing better than feeling like you’re flying perfectly through the air and going into the water with a perfect entry. The adrenaline rush that you get from diving and gymnastics is addicting, even if you’re putting yourself in danger.”

As a freshman, Pitts was inspired to draw on her skill and bravery from a lifetime as gymnast to try diving for the perennial powerhouse Andover High.

Earlier this month, senior Pitts wrapped up her fourth season as a top diver for the Golden Warriors, who competed in the “Fall 2” season after the regular fall was postponed.

“Emma is an amazing leader,” said Andover swim coach Patty Barrett. “She broke the 200 (score) mark for the first time this season.”

Pitts scored a career-best 216 at a meet during the season, and finished sixth at the virtual Merrimack Valley Conference Meet.

“This ‘Fall 2’ season was definitely different from what I originally had in mind,” Pitts said. “But I was still so glad we could have a season. I love my teammates, and I love the energy that the team had, so I was really excited to have the chance to lead our team to another successful season, even though it was shorter than usual.”

It was gymnastics that led Pitts to give diving a shot.

“I’ve been a gymnast for as long as I can remember,” said Pitts, who was a gymnastics captain for Andover High. “In the summer leading up to my freshman year, one of my neighbors who was also a gymnast and a diver convinced me that gymnasts make naturally good divers and that I should try out for the team. I signed up on a whim after debating it for a few weeks. I can’t even imagine what my life would be like now if I had chosen not to try out.”

Her gymnastics background helped and hindered her in ways.

“The No. 1 thing that you are taught as a gymnast is to never land on your head,” Pitts said. “This safety precaution was so ingrained in me that the idea of landing on my head (in diving), even in water, seemed an impossibility. I still distinctly remember the first time I was asked to do a back line-up (fall backwards off of the board and land on my head) and thinking ‘are these people crazy?’

“Additionally, though I was still flipping and twisting in diving, I had to completely relearn how to control my body in the air. In gymnastics, you would never get as much height as you would off of the board, so you are used to flipping way faster to make it around than you need to when diving. It took me quite a few faceplants to figure that one out.”

“Since Emme stepped foot on the diving board her freshman year, she has been focused on being the best she can be,” said Pierce. “She works hard each and every day, while also being a great support to her teammates.”

CAPTAIN IN A PANDEMIC

Pitts, along with fellow tri-captains Emily Chen and Polina Malinovskaya, faced a unique challenge leading the Golden Warriors during the unprecedented Fall 2 season.

“There were a lot of unique challenges of the Fall 2 season,” she said. “The team has millions of traditions that we couldn’t do because of COVID. I just wanted to give the new swimmers and divers the same amazing experience that I had my freshman year.

“Since all of our meets were virtual, there was a massive change in how meet days had to be conducted. I’m not a swimmer, but I would think that without someone next to you racing you, you might not go as fast. Additionally, it was difficult to replicate the same high energy environment that we are normally able to create at meets.”

But Pitts remained positive, and ended up embracing the season.

“I think that one memorable moments came from the MVC meet,” she said. “I was backup timing, and standing there with Patty (Barrett) and (diving coach) Kelly (Simard), I was amazed by how much time every single girl was able to drop from the times.

“I felt like seeing these great improvements was really a testament to how much work everyone put into this season, despite the fact that it was not necessarily what we had originally anticipated. Also, though not everyone liked them, I grew to love the morning practices!”

Andover diver/gymnast Emme Pitts is a star in the classroom. A straight-A student, she has received just one B-plus in her high school career. She has a weighted GPA of 4.47 and has taken five Advanced Placement classes.

Pitts has also worked at a preschool gymnastics instructor at Wilkey’s Gymnastics and for a courier business.