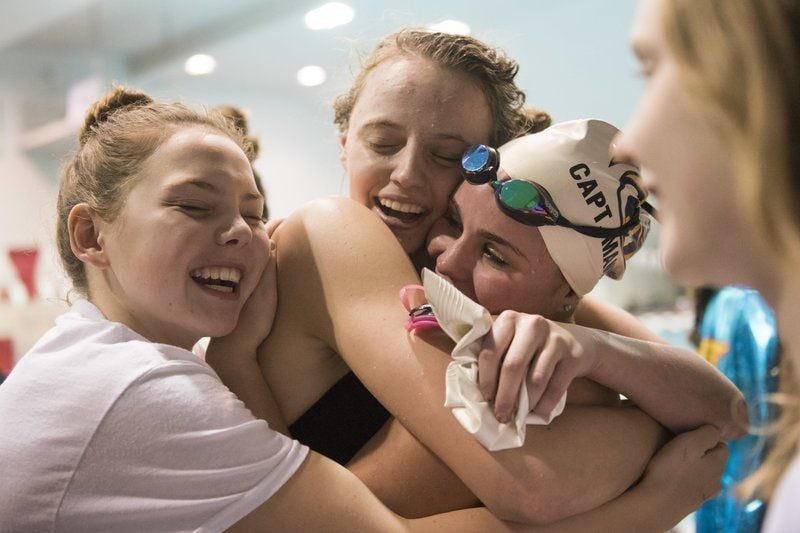 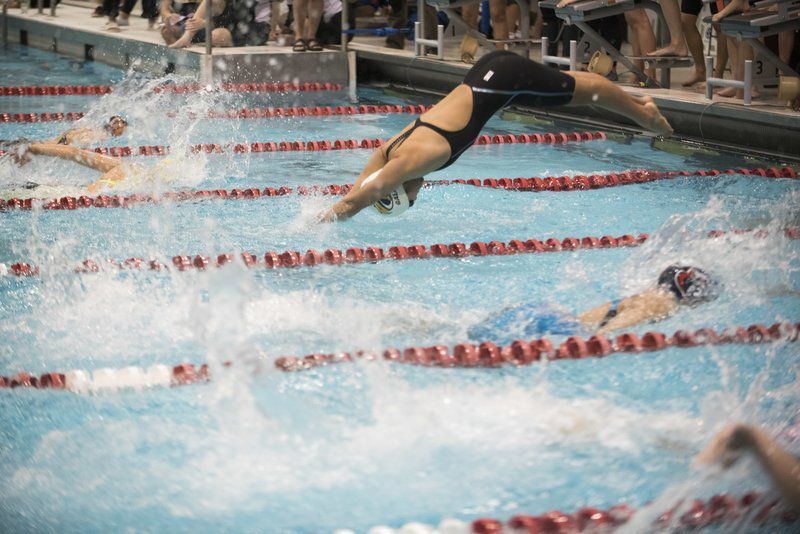 SAM GORESH/Staff photo. Sophomore Mia Galat dives into the pool for her leg of the 200 yard freestyle relay in the MIAA Division 1 State Championships at Blodgett Pool at Harvard University in Allston. 11/20/16 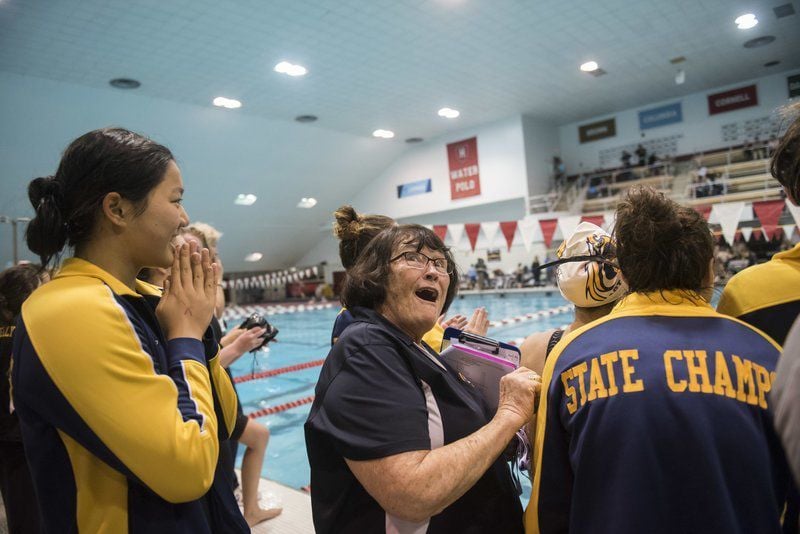 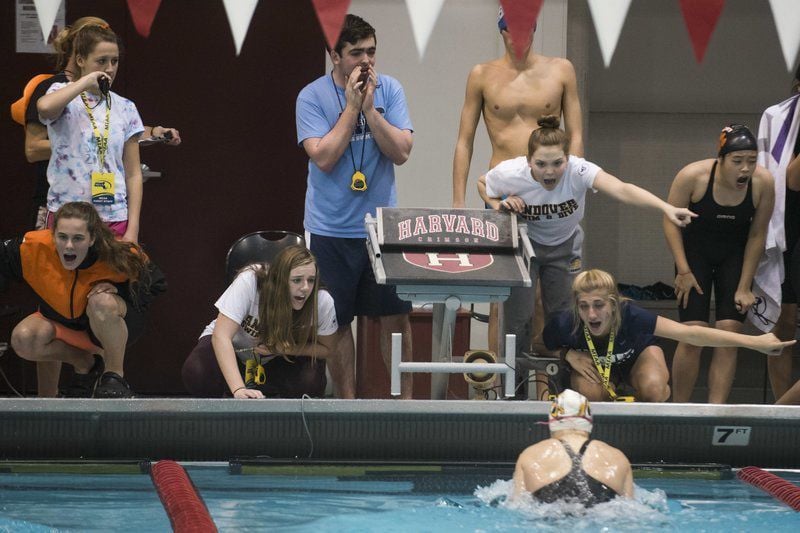 SAM GORESH/Staff photo. Members of the Andover swim team cheer for sophomore Jordan Clements in the final heat of the 100 yard breaststroke race in the MIAA Division 1 State Championships at Blodgett Pool at Harvard University in Allston. 11/20/16 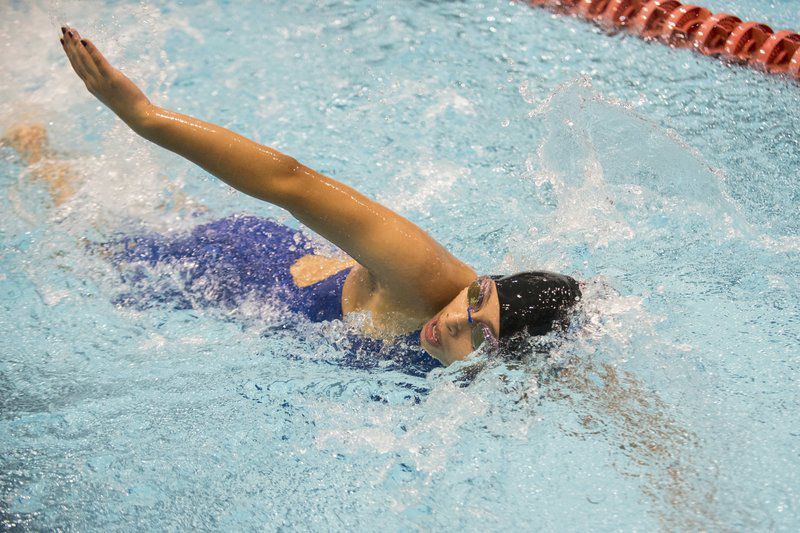 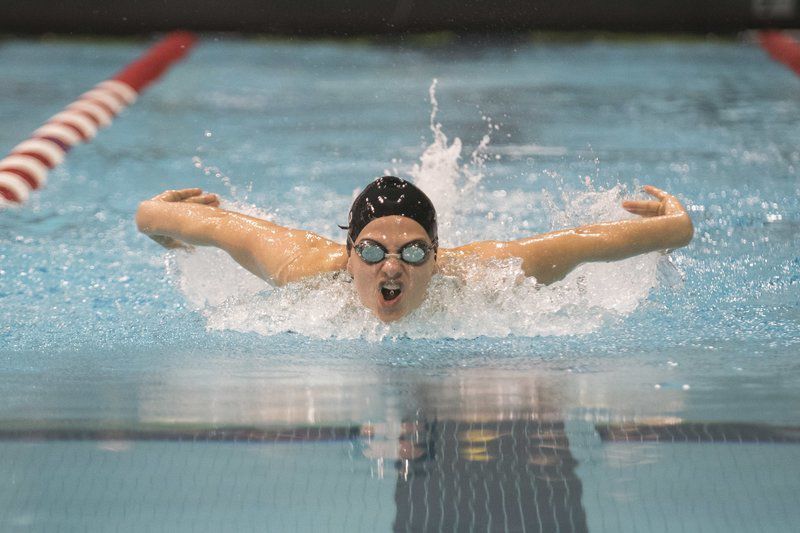 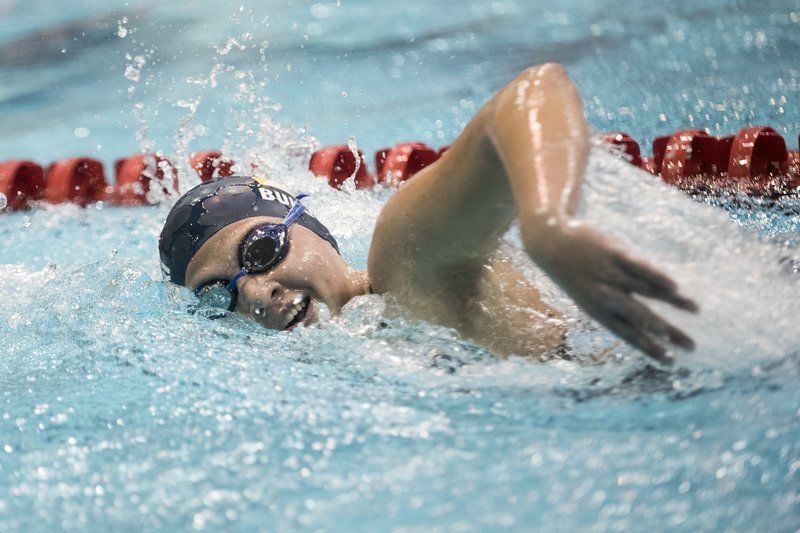 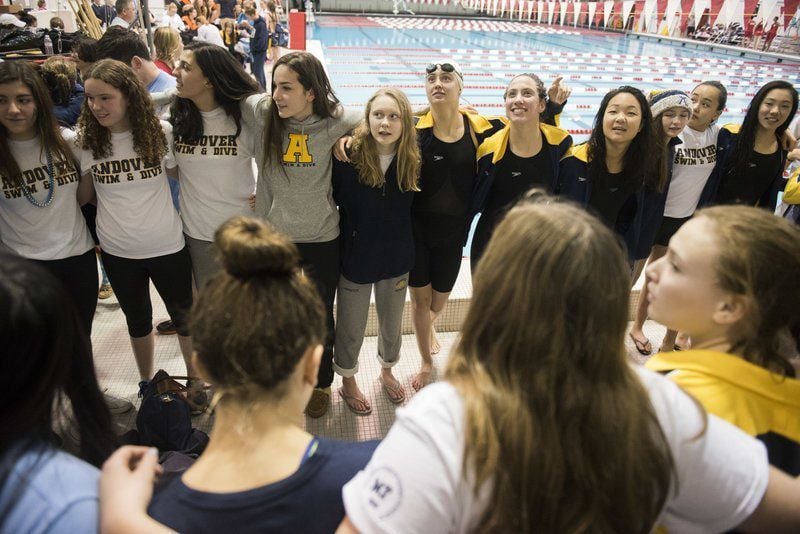 SAM GORESH/Staff photo. The Andover swim team gathers together as they wait for their trophy for winning the MIAA Division 1 State Championships at Blodgett Pool at Harvard University in Allston. 11/20/16 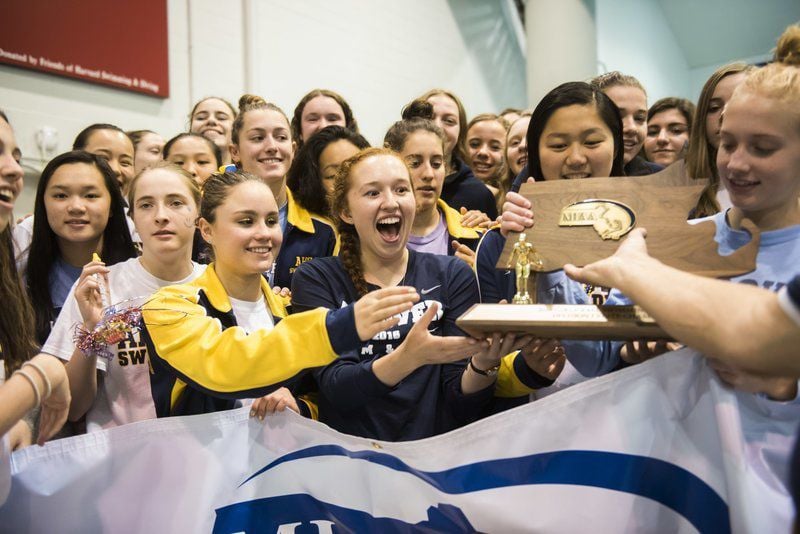 SAM GORESH/Staff photo. Sophomore Mia Galat dives into the pool for her leg of the 200 yard freestyle relay in the MIAA Division 1 State Championships at Blodgett Pool at Harvard University in Allston. 11/20/16

SAM GORESH/Staff photo. Members of the Andover swim team cheer for sophomore Jordan Clements in the final heat of the 100 yard breaststroke race in the MIAA Division 1 State Championships at Blodgett Pool at Harvard University in Allston. 11/20/16

SAM GORESH/Staff photo. The Andover swim team gathers together as they wait for their trophy for winning the MIAA Division 1 State Championships at Blodgett Pool at Harvard University in Allston. 11/20/16

BOSTON — Saying that Andover is returning home after a perfect season would still be too vast of an understatement.

The Warriors have built a solid castle, a nearly immovable fortress around the throne that anoints the top swimming team in the state. There have a been a few blips among the recent years, but those have been few and far between.

Andover made it three consecutive state championships and 14 in the last 18 years Sunday afternoon at Blodgett Pool on Harvard’s campus, keeping it interesting for the first hour but eventually kicking past the competition in a nearly 200-point victory.

Newton North, who finished second overall with 281 points, actually beat Andover by .57 seconds in the 200 medley relay, which was the first event of the day. But the Warriors were not down for long, as they reached far past everyone else with a score of 476.5.

“I love this team so much!” said sophomore Jordan Clements. “It means the world to us to accomplish this. Everybody is swimming amazingly. So many people are going out there and getting their best times. I’m just so proud of everyone.”

Everywhere you looked on the leaderboard Sunday Andover was at or near the top. Out of the 12 events, the Warriors won half of them and finished in at least the top-6 in all the others.

With the win, the legacy and legend of 25-year coach Marilyn Fitzgerald continues to grow.

“It never, ever gets old,” said Fitzgerald. “Today for example a couple of kids wanted me to look up in the stands and watch a couple parents in particular who really get excited when their daughters swim. And it’s just fun stuff like that that happens to make it different and fun every year.”

If you take out the ‘L’ in the Clements sister’s last name, you would have the exact opposite of what Emily and Jordan are like in the pool.

Andover’s dynamic sister duo was at it again Sunday, combining to win five state championships between the individual events and relays.

It started when freshmen Emily beat teammate Rachel Landry to win her first-ever individual state championship in the 200-yard IM. Her time of 2:07.56 beat Landry by over four seconds.

From there it was the 100-yard freestyle, an event she won with a new course record of 52.57. After she cooled down from that it was off to the relays. Swimming third in the 400-yard freestyle relay and anchor in the 200-yard freestyle, Emily helped Andover edge Brookline and Acton-Boxboro in each.

“It was so fun and it feels so amazing,” she said. “I didn’t expect to be a state champion at the start of the year. I just listened to what coach told me to do throughout the year and made some small corrections here and there.”

Minutes later Jordan took to the pool as the top qualifier in the 100-yard breaststroke and lived up to the billing. Her time of 1:06.36 beat Newton North’s Serena Ly by .55 seconds.

She finished third at states in the event last year, but broke through to become an individual champion Sunday afternoon.

“It’s the greatest feeling in the entire world,” she said. “It’s indescribable. It was my goal to win a state championship at the beginning of the year so I am very happy right now.”

Junior Sophia Ju came into her best event, the 50-yard freestyle, with the fourth-best qualifying time.

But being in lane six did not stop this Warrior from going back-to-back.

Ju defender her state title in the event, racing to a time of 24.57 and beating Brookline’s Sara Song by .25 seconds.

Ju was also the second leg on the 400-yard relay team, making her a two-time state champion on the day.

Haverhill’s Taylor Waligora not once, but twice greatly exceeded what was predicted of her coming into states.

The sophomore’s best event was a third-place finish in the 500-yard freestyle, where her time of 5:23.59 chopped off nearly five seconds from her qualifying time. It was the second consecutive time she’s finished third in the 500 freestyle.

That trend actually started for her in the 200-yard freestyle where her fifth-place time of 2:00.50 cut her qualifying time by six seconds.

Her qualifying times were not prior personal bests, but her performance Sunday gave her new milestones.

“I was right on my actual best times,” said Waligora. “I have gotten two personal bests today though. I was hoping to win the 500, but I saw the girl ahead was a lot faster than me.”