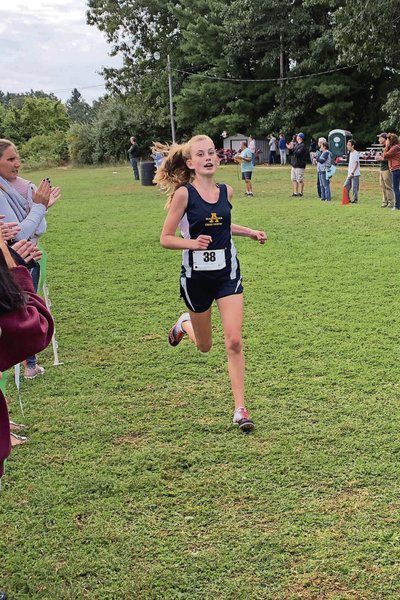 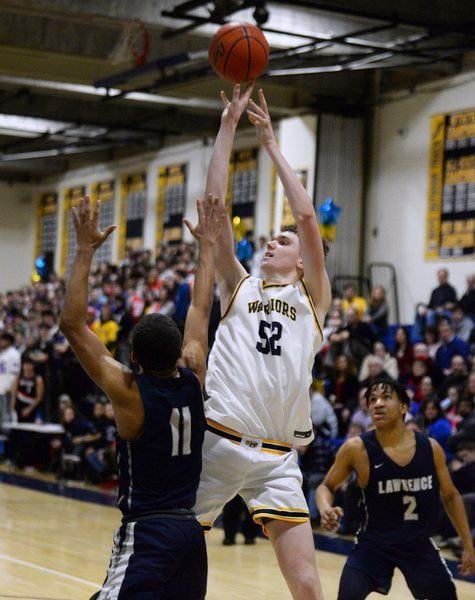 Kyle Rocker scored 11 of his game-high 25 points in the fourth quarter to lead Andover to its biggest win of the season, 66-57 over fellow MVC power Lawrence on Senior Night on Friday.

“This was a very big win for us,” said Rocker. “I kept telling myself we had to get the W. I didn’t get off to a good start, but once I got in my rhythm, I felt pretty good.”

Aidan Cammann, Andover’s 6-foot-6 sophomore center, scored 14 of his 18 points after halftime. He also grabbed 14 rebounds and had three blocks.

“Faz (coach Dave Fazio) has been telling me I have to score more, so I’m trying to go to the basket more,” said Cammann. “I felt I had a little bit of a (height) advantage and I wanted to use it.”

Kyle Rocker continued to dazzle with 27 points as Andover closed out the regular season by rolling past Charlestown 77-53 on Sunday. Aidan Cammann added 12 points for the winners.

Molly Kiley stole the show, winning the 2-mile in 11:28.61 to pace Andover at the Division 1 state meet last Wednesday at the Reggie Lewis Center in Boston.

Michael Makiej took second in the high jump, and teammate Jack Drake was fourth — each jumping 6-4 — to lead Andover at the Division 1 state meet last Wednesday.

No one had more reason to celebrate at Saturday’s Division 1 North sectional than Andover.

While finishing third as a team, the Warriors crowned their first-ever sectional champs in 160-pounder Elias Maita and heavyweight AJ Heidke, and qualified eight wrestlers for next weekend’s Division 1 state meet at Methuen.

To top it off head coach Mike Bolduc was named Division 1 North Coach of the Year at the conclusion of the meet.

Maita won a hard-fought 5-3 decision over St. John’s Prep’s Achilles Gikas in the finals to improve to 38-1 on the year while Heidtke used a strong third period to beat Haverhill’s Jay Levy, 6-3, and is now 32-8 on the year.

Finishing second for the Warriors were Jonathan Davila (145) and Sean Ballou (170). Among the other placers, the biggest surprise was a third at 220 by sophomore Yasser Maita, who had two pins including in the consolation finals.

“It was definitely a very good day for us,” said Bolduc.

St. John’s Prep’s Rawson Iwanicki of Andover won the 138-pound title and improved to his season record to a sterling 45-2..

Andover got quick revenge for its loss in the finals of the Hillie duals, tripping Lawrence 40-30 last Wednesday. That gave the Warriors (21-3) a school record 21 wins and clinched a tie for the MVC Division 2 title.

Key wins for the Warriors were by Theo Krueger at 126, Connor Sheehan at 182 and heavyweight AJ Heidtke who avenged a personal loss with a 10-0 major decision.

Back from a minor injury, Jake Brezner made 24 saves as Andover clinched the Merrimack Valley Conference Division 1 title with a 5-3 victory over Westford Academy last Monday. Nate Byers, Mike Feeney, Leo Byers, Anthony Previte and Tim Kobelski each scored a goal for the winners (9-8-1).

Despite 15 points for Tatum Shaw, Andover fell to Billerica 48-34 on Friday.

Andover was sixth as a team (443 points) at the North Shore Ski League championship last Wednesday.