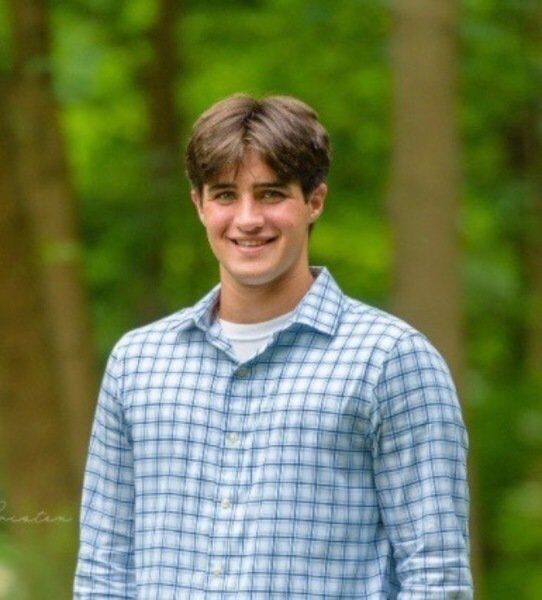 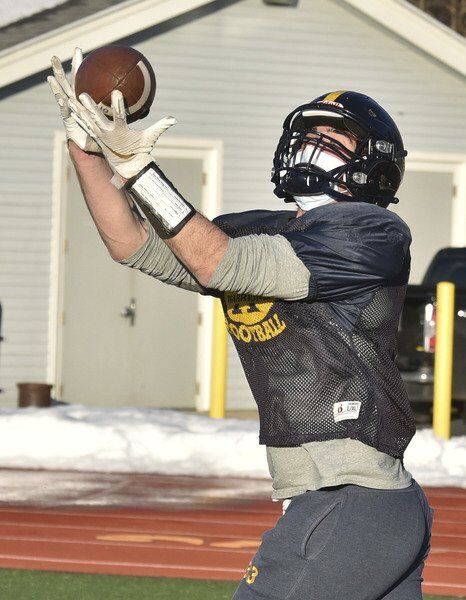 CARL RUSSO/Staff PhotoAndover’s Tomas Loureiro can catch the football, but his true passion is dishing out hits as a top linebacker and blocking back for the Golden Warriors. 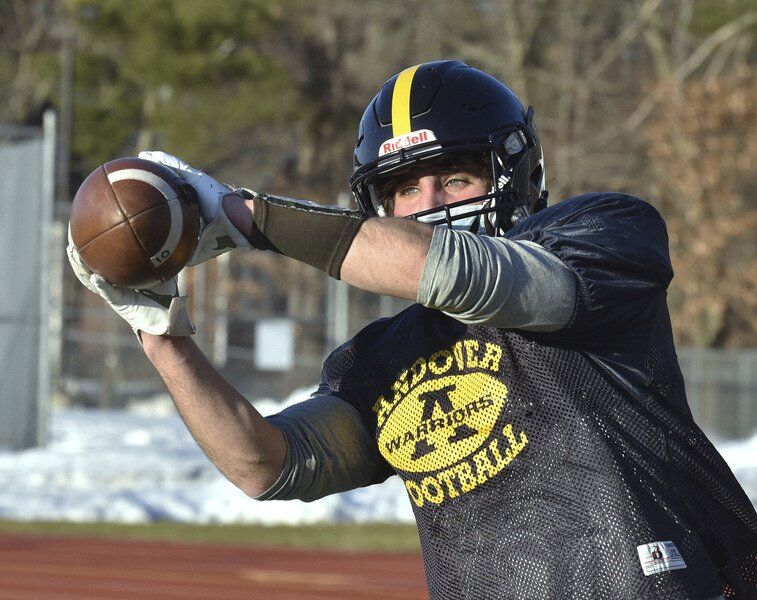 CARL RUSSO/Staff photosAndover senior captain Tomas Loureiro grabs a pass out of the air during practice earlier this season. Loureiro has been a force at linebacker for the Golden Warriors through three games.

CARL RUSSO/Staff PhotoAndover’s Tomas Loureiro can catch the football, but his true passion is dishing out hits as a top linebacker and blocking back for the Golden Warriors.

CARL RUSSO/Staff photosAndover senior captain Tomas Loureiro grabs a pass out of the air during practice earlier this season. Loureiro has been a force at linebacker for the Golden Warriors through three games.

Andover’s Tomas Loureiro crept up towards the line of scrimmage as the opposing QB called out signals. The second the ball was snapped, the linebacker threw a blocker aside, lowered his shoulder and delivered a crushing hit to the running back, jarring the ball free and pouncing on the fumble.

Local ball carriers beware. When Loureiro is on the field, he’s there to deal out punishment.

“Making a big tackle is a really incredible feeling, definitely a rush,” said Loureiro. “My favorite part of playing football, and linebacker, is definitely the hitting aspect. I love being able to just be let loose and make plays wherever I can.”

Loureiro's already made plenty of plays for Andover during its most unusual “Fall 2” season.

Through two games, the senior has registered a team-high 27 tackles, 14 solo, and has emerged as starting blocking back in the Golden Warriors’ run-heavy read-option offense.

The 6-foot, 210-pound St. Lawrence University (N.Y.) recruit made 12 tackles in Andover’s season-opener against Methuen, turned in seven tackles in a win over Lowell and returned an interception for a touchdown and made eight tackles in a victory over Haverhill.

It’s been quite an emergence for Loureiro, who made 36 tackles in his first season as a starter in 2019.

“Tomas is just a tremendous young man,” said Andover football coach EJ Perry. “He’s mature, eloquent, intelligent and a hard-nosed football player. The bone crushing hits only compliment his ability to be in the right gap all the time. He controls the entire defense like a coach on the field.”

A linebacker since he began playing football in the Andover Junior Football League (AJFL) as a fourth grader, Loureiro struggled some after being moved to safety during his sophomore season and the start of his junior year.

“I didn’t have trouble at all with the transition back to linebacker from safety. Even when I was playing safety, I was always a more physical player. So moving back in the box at linebacker wasn’t a very hard adjustment to make.”

During the long COVID-19 break between his junior season — which he closed out by making 12 tackles in a Thanksgiving Day win over — and his senior campaign, Loureiro made major strides as a linebacker.

“I think the biggest reason I’ve made so many tackles this year has been the improvement I’ve made in seeing my reads (of opposing offenses) clearly this year,” he said.

“Knowing where to position myself pre-snap and then being able to know where the ball is going has allowed me to put myself in places where I can fly around and make tackles. When I’m making plays I know that I’m seeing the field well and am able to put myself in the best position I can be.”

In addition to leading the defense, Loureiro has added blocking back — or “H-back” — on offense, opening holes for speedy quarterback Scotty Brown and running back Lincoln Beal.

The new offensive responsibilities were initially a challenge.

“Becoming a blocking back on offense was something that I definitely struggled with at first,” Loureiro, who caught two passes for 9 yards against Methuen, admitted. “I hadn’t played offense in a long time, so it’s taken some time to get used to.

“But I feel like I’ve come a long way and I’m really enjoying it. Of course, carrying the ball would be fun, but that’s something that’s up to the coaches and we’ll just have to see what happens.”

Next, Loureiro — a member of the National Honor Society — will play football at St. Lawrence University.

“Without a recruiting season (due to COVID) he had to advocate for himself,” said Perry. “He did individual workouts and led the team workouts, while sending out homemade tapes to colleges. Two Division 3 powers loved what they saw; Dennison College in Ohio and St. Lawrence University. St. Lawrence will be very happy to have him on their team.”

“If we had lost this season to COVID, it would have been really devastating,” he said. “For the rest of the season, I just hope we can play our best and get a lot of wins along the way.”

Loureiro has a friendly rivalry with a teammate at practice, his brother, promising sophomore running back/linebacker Joseph Loureiro.

The two often face off when Tomas and the starters scrimmage Joseph and the reserves.

"The funniest thing to watch in practice is the correspondence between Tomas and his brother Joe," said Perry. "Joe's fighting for varsity minutes, and currently is on both the offensive and defensive scout teams. This brings him into direct contact with his brother and you can hear the two bark at each other from across the field."