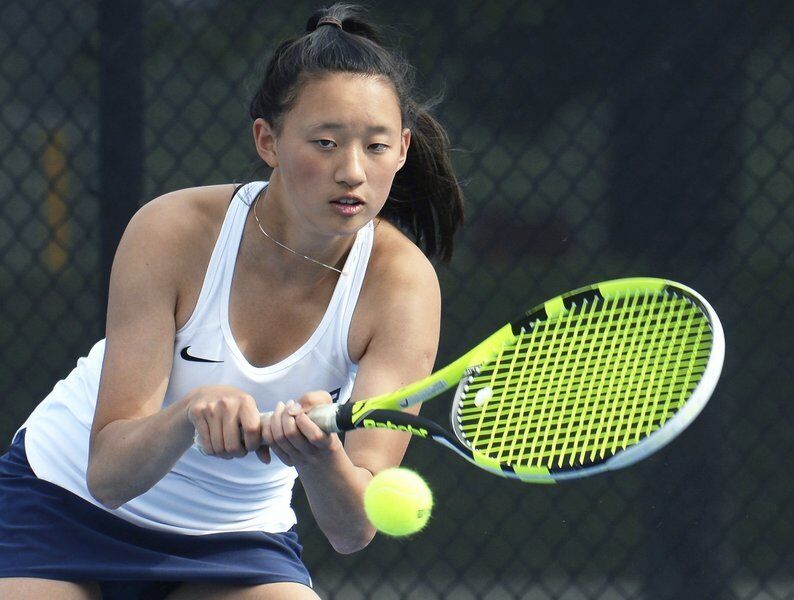 CARL RUSSO/Staff file photoAndover's Isabel Zhou has been nearly untouchable on the court this spring. The senior entered the week with eight victories, including five 6-0, 6-0 shutouts. 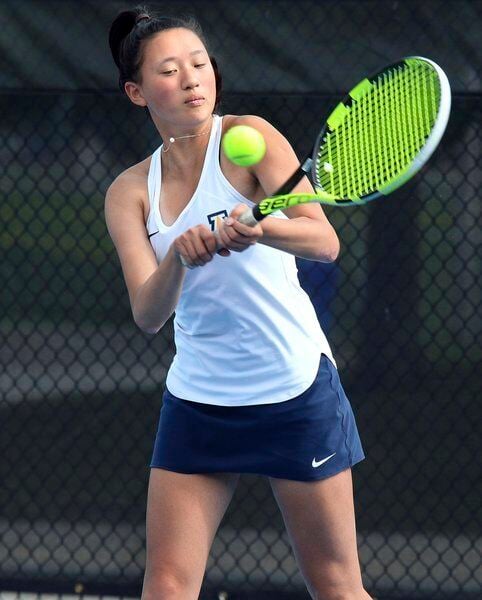 CARL RUSSO/Staff file photo.Andover's Isabel Zhou, here in a file photo against North Andover, has delivered a brilliant senior season at No. 1 singles. She has picked up this spring after a dominant sophomore season. 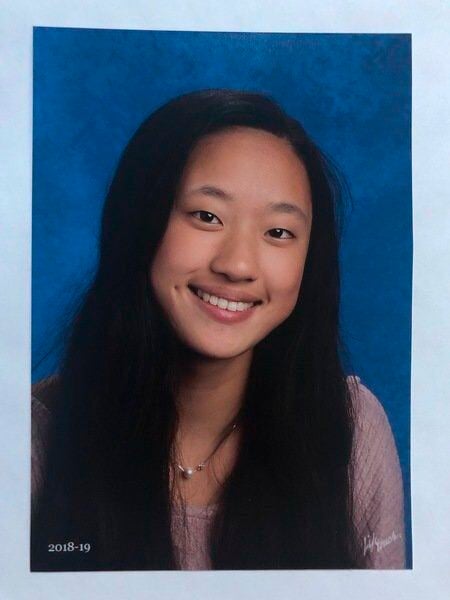 CARL RUSSO/Staff file photoAndover's Isabel Zhou has been nearly untouchable on the court this spring. The senior entered the week with eight victories, including five 6-0, 6-0 shutouts.

CARL RUSSO/Staff file photo.Andover's Isabel Zhou, here in a file photo against North Andover, has delivered a brilliant senior season at No. 1 singles. She has picked up this spring after a dominant sophomore season.

Andover High’s Isabel Zhou admits she was struck by a strange feeling earlier this spring, when she stepped onto the tennis court with the Golden Warriors for the first time in two years thanks due to the COVID-19 pandemic.

That feeling, however, didn’t last long.

“Quite honestly, it was very surreal and a little odd at first,” she said. “Especially wearing masks, not being able to shake hands, etc. But it felt good—rejuvenating—more than anything. My schedule feels empty and incomplete without tennis, so I’m really just thankful and excited every time I go to practice or get ready for a match.”

Finally back on the court in a Golden Warrior uniform, the senior wasted no time showing she hadn’t lost her ability to dominate.

In fact, opponents have struggled to score a single point against Andover’s No. 1 singles player.

Zhou entered the week with a dazzling eight individual victories in Andover’s nine matches. Five of those victories have been 6-0, 6-0 shutouts — including four of her first five matches. Her closest win was a still relatively easy 6-2, 6-3 victory against Haverhill.

For the season, Zhou has outscored opponents by a combined 96-7 margin in her victories. She earned a 6-0, 6-0 win on Sunday.

With Zhou leading the way, perennial state title contender Andover has rolled to a 9-0 record entering the week, with eight 5-0 shutouts and one 4-1 win.

“I’m incredibly excited for this season,” she said. “For those that know me, tennis is my favorite part of the school year. I talk incessantly about it. I love being on the courts under the sunshine, spending time with my teammates, and competing. It’s a little bit like a home away from home for me, so I’m grateful that I get to end senior year on such a high note.”

Dominating the competition is nothing new for Zhou, who earned Merrimack Valley Conference Player of the Year in 2019.

After playing No. 2 doubles as a freshman, Zhou won the No. 1 singles spot for Andover as a sophomore and surged to a 13-4 overall record, 10-0 against MVC opponents. That gives her a 17-0 career singles record against league foes.

“She is a great kid and a very strong leader,” said Andover coach Alan Hibino. “It doesn’t matter if you are first or second singles, it’s all about the team.”

Growing up, Zhou played a variety of sports, from skating to swimming and gymnastics before falling in love with tennis at 7-years-old.

She feels her success on the court has been a combination of physical and mental.

“Physically, I love my backhands, down the line approach shots and I have increasing confidence up at net,” she said. “But, more important is the mental aspect of my game. There’s a quote by Venus Williams that reads, ‘Tennis is mostly mental. You win or lose the match before you even go out there.’ I completely agree, and it’s something I try to remember every time I step out on the court.

“Over these last four years, I’ve come to really value my patience and perseverance as a player — the drive to get to every ball, to come back regardless of how down I am. There’s also the concept of strategy — figuring out your opponent’s strengths and weaknesses, their patterns, and visualizing your next shots. It’s also incredibly important to have trust in your abilities and be respectful of others.”

During the COVID-19 shutdown, which erased her junior tennis season, Zhou kept her tennis skills sharp with plenty of practice.

“I played indoors at my club (Willows Racquet Club & Fitness) as well as the Manchester Athletic Club,” she said. “Over the summer, I was at the Andover High tennis courts almost every day with my friends. (Recently) my coach and I even competed against each other in regular mixed doubles matches. He has yet to win.”

A member of the National Honor Society, Zhou has taken Advanced Placement biology, French, language and composition, and calculus. She will be attending Case Western Reserve University in Cleveland to study neuroscience on the pre-med track.

But first, she wants to finish her high school tennis career with a bang.

“I’d like to remain undefeated in the MVC,” said Zhou, an accomplished singer. “I also aspire to advance as far as possible as a team in the state tournament with the state title in mind. For now, as Bino (coach Hibino) often reminds us, we focus on one match at a time, one game at a time, and one point at time.”