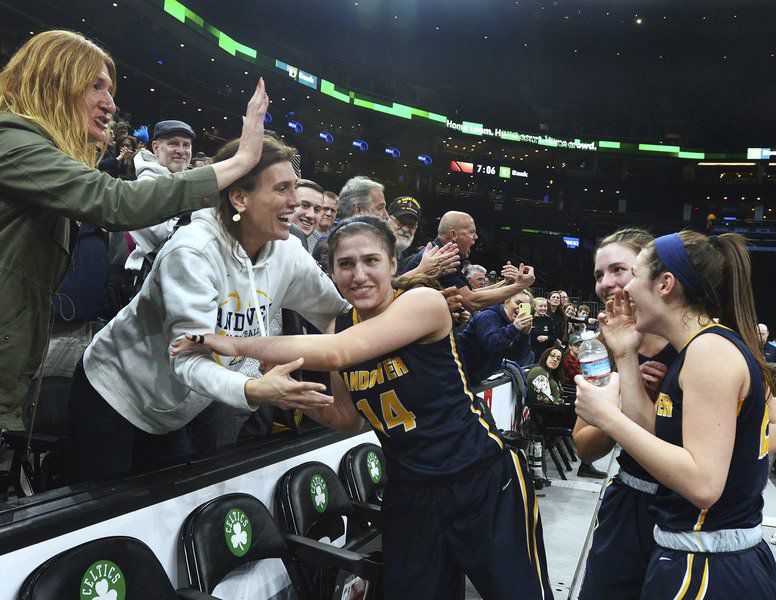 CARL RUSSO/staff photo.From left, Andover's Tatum Shaw, Brooke Hardock and Shea Krekorian celebrate with the fans after the Division 1 state semifinals. Sportswriter Kyle Gaudette admitted to doubting the Golden Warriors throughout the tournament, only to be proven wrong time and again. 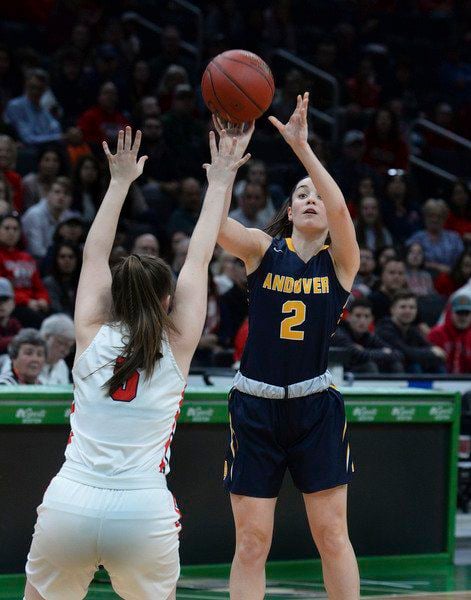 CARL RUSSO/staff photoAndover senior co-captain Shea Krekorian was a key piece to the Golden Warriors' success that surprised many.

CARL RUSSO/staff photo.From left, Andover's Tatum Shaw, Brooke Hardock and Shea Krekorian celebrate with the fans after the Division 1 state semifinals. Sportswriter Kyle Gaudette admitted to doubting the Golden Warriors throughout the tournament, only to be proven wrong time and again.

CARL RUSSO/staff photoAndover senior co-captain Shea Krekorian was a key piece to the Golden Warriors' success that surprised many.

To coach Alan Hibino and the Andover girls basketball team: I didn’t think you could do it.

Actually, before I get into that, first I want to thank the Golden Warriors for going on such a memorable run. I was lucky enough to be there for all five of Andover’s playoff games, and it was a treat to watch.

The Warriors were one of the most unselfish, disciplined, poised, hard-working and well-coached teams I’ve covered, and there’s just something about a team that plays its best basketball in the toughest of situations that is so pleasing to watch.

It’s the definition of mental toughness.

Which brings me back to the much-needed apology for the 2019-20 Golden Warriors: I’m sorry for not believing!

After needing a fourth-quarter comeback to beat Arlington at home in the first round of the Division 1 North tournament, I gave the Warriors little shot of pulling off an upset at rival Central Catholic in the next round. I mean, was that foolish, though? The Raiders won both regular-season games, were two-time defending North champions, hadn’t lost an MVC game in three years and were welcoming back star point guard Nadeshka Bridgewater from a broken hand.

And when Bridgewater and Claudia Porto started raining 3s in the fourth quarter to cut Andover’s lead to just one possession, I thought, “Well, here we go.”

Well, okay, Andover put it all together for a full 32 minutes and played arguably its best game of the season. But it’s just one game, and upsets happen all of the time. And after the emotions of taking out your rival on their home court, were the Warriors poised for a letdown?

I thought the North semis against Chelmsford — a team that beat Andover by five in the regular season — was a coin flip, but I expected the Warriors to come out slow and run out of steam late.

“You know, Brad Stevens said, after his first NCAA tourney lost, the next year when Butler made the tourney again he said, ‘We expect to win a championship,’” said Hibino after that semis win. “So that’s the mindset we have here. Did we expect to make it this far? Yes. We expect to go out and compete every game.”

Now the Warriors are in the North finals at the Tsongas Center against Cambridge, who arguably had the best players on the floor in sophomore Sophia Vital and junior Kizziah Ruff. I honestly didn’t know too much about Cambridge heading into the game, but knew that guard duo would be tough to deal with.

So, 50-50 again. Meaning if Andover had lost, I wouldn’t have been shocked.

But the ball was tipped, and the Warriors had a lead after every quarter: final, 57-52.

You could stop there and this would already be a great story. You beat your rivals, you got to play in an arena and you won a North title as a surprise No. 6 seed. But now, the Warriors were off to the TD Garden for the state semis.

Awaiting them there was South champion Bridgewater-Raynham.

Again, here me out.

Bridgewater-Raynham had lost just twice, and was consistently ranked in the top-5 of the Boston Globe’s rankings all winter. The Trojans were led by stellar 6-foot-3 sophomore Shay Bollin, and were coming off a buzzer-beating win in the South finals. Plus, throw in the allure of playing on the TD Garden parquet.

Which brings us to the state final that was canceled due to the coronavirus pandemic. The Warriors were set to play Franklin (24-0), the undefeated Central champions who were basically the wire-to-wire No. 1-ranked team by the Globe all season, at the DCU Center.

Instead, both teams were announced as co-state champions.

It’s a title and accomplishment the Warriors truly deserve for their play this winter. Hibino and his staff, senior co-captains Shea Krekorian and Brooke Hardock, and the rest of the Warriors are true champions.

Spoiler alert though: Gun to my head, I would have picked Franklin.

But if you’ve learned anything from this column — other than my stupidity — it’s that the Warriors wouldn’t have cared.

I feel awful that Krekorian and Hardock didn’t get a chance to compete for a state title. I feel equally as awful for Brigham and the rest of the Franklin seniors for the same reason.

But I also feel awful that we didn’t get to watch the Warriors prove me wrong one more time.

Something tells me they would’ve.