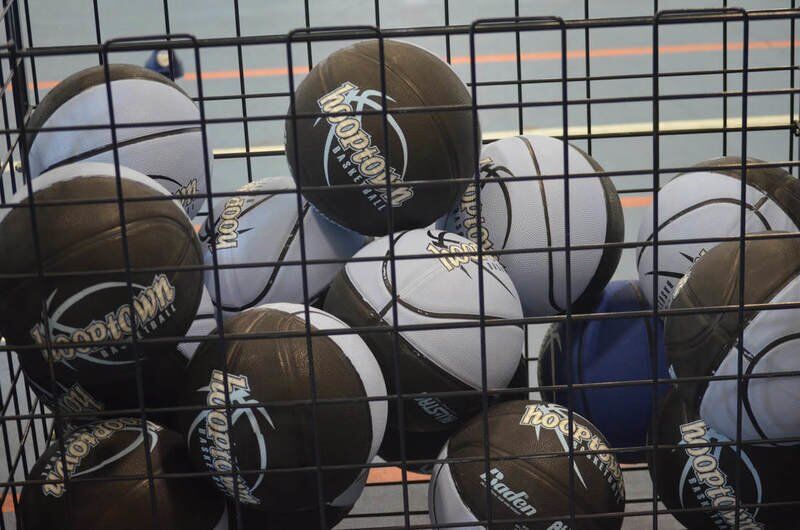 Courtesy photoThe Hooptown Camp basketballs will remain locked up for the summer, the first time in 31 years that Dave Fazio’s camp has not taken place. 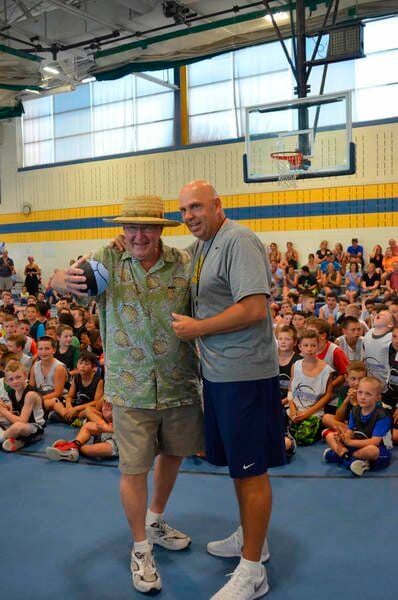 Courtesy photoOne of the yearly highlights at Hooptown Camp in Andover is when “Grandpa John” shows up. Here Dave Fazio awards “Granda John” as Camper of the Day two summers ago. The Andover grandfather showed up several years ago to watch his grandchildren and later continued even after they graduated from high school.

Courtesy photoThe Hooptown Camp basketballs will remain locked up for the summer, the first time in 31 years that Dave Fazio’s camp has not taken place.

Courtesy photoOne of the yearly highlights at Hooptown Camp in Andover is when “Grandpa John” shows up. Here Dave Fazio awards “Granda John” as Camper of the Day two summers ago. The Andover grandfather showed up several years ago to watch his grandchildren and later continued even after they graduated from high school.

The Dave Fazio we are used to is the one with his necktie turned sideways, whipping his jacket on some bench, and yelling at a referee like the official stole his first born son.

We are also used to the laughing Dave Fazio, playfully pushing a buddy after a bad joke, or taking over a room with some half-true story from his 31 years in Andover.

The Dave Fazio we are not used to is the current one, the somber guy who looks like he lost two close friends, which he did, and lost his summer baby, Hooptown Camp, due to governor Charlie Baker’s restrictions.

“The worst summer of my life?” repeated Fazio. “It’s not even close. One week, one of my all-time favorite guys, Joe Iarrobino (Jr.) passes away. His dad (Joe Sr.) has coached our eighth grade team since 1985. Then, a few days later, Jim Arnold, who is like family to me ... he passes away. I’m sick to my stomach over losing both of them.”

Then, two weeks ago, governor Baker noted basketball was among several sports that were too risky to be played.

For the first time since 1989, Fazio’s baby, Hooptown, will not happen.

Hooptown Camp is as much a part of Fazio’s life and persona as his coaching the Andover High boys basketball team. It’s a family affair, including his wife, son (D.J.) and two daughters Ally and Livy).

D.J., who excelled as a point guard for his son at Andover High, works as a coach and instructor. Ally, who helped lead the Andover girls basketball team to three straight Division 1 state titles and played Division 1 college lacrosse at UConn, is the nurse practitioner. Livy, a former Golden Warrior cheerleader, oversees the food and beverage. And mom runs the administration.

“My wife begins working on it, full-bore, on January 2,” said Fazio, of his wife Colleen. “She’s probably returned five million emails. And my kids have been there the entire time, first as campers, now helping us run it.”

While it is a place for future basketball stars, both boys and girls — and it has produced many of the top basketball players from Andover High and around the Merrimack Valley Conference, the vast majority are there for six hours — 8 a.m. to 2 p.m. — to have a good time.

Like most family businesses, Fazio had figured out some semblance of social distancing, when to wear masks, smaller groups, etc.

But the governor’s plan ruled the only basketball that can be played is when one kid uses one ball.

Defense, passing, picks, etc., all essential parts in basketball instruction, were not allowed.

Hooptown really is an institution in Andover with about 1,000 campers over the five or six week schedule.

It’s a way to get kids away from their phones and video games.

“The parents have been incredible,” said Fazio. “For the most part, they’ve been understanding, saying ‘Save us a spot for next year.’ We are lucky in Andover.”

“The virus is really taking a toll on all of us in a lot of ways,” said Fazio. “We’re not alone by any stretch. It’s tough to stay positive, but we have to for the kids.”

Hooptown’s M.O., according to Fazio, is having fun. It’s not going to be the same in summer of 2020.

“Most teachers and coaches love going on vacation in the summer,” said Fazio. “Don’t get me wrong, working the camp for four or five weeks takes a lot of energy. But for me, it’s a perfect way to spend my summer, with kids having fun and playing some basketball.”