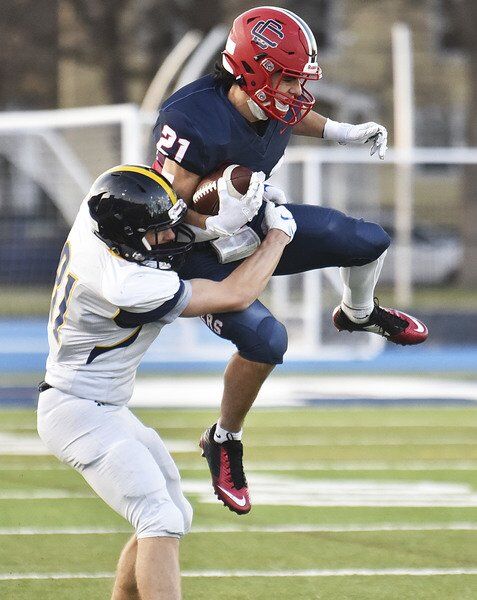 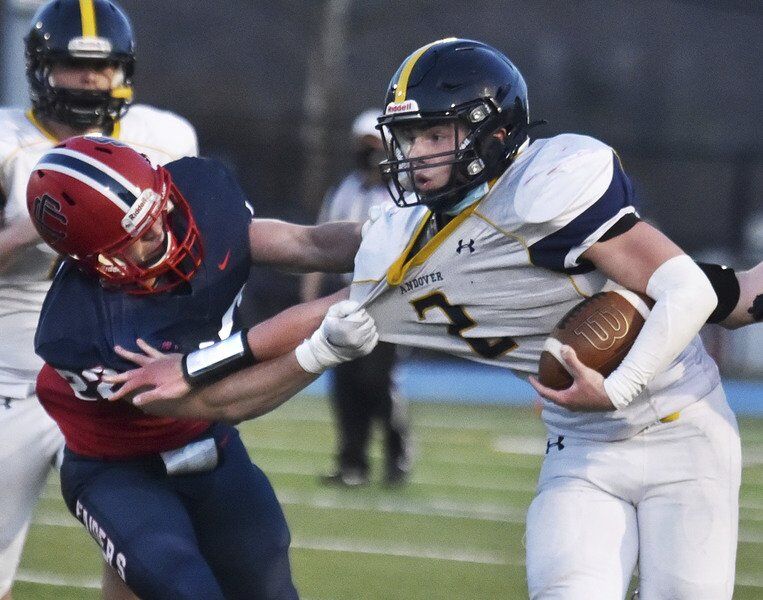 CARL RUSSO/staff photoAndover's Lincoln Beal fights through a Central Catholic tackler on Friday. It was a special moment, returning to that gridiron rivalry.

CARL RUSSO/staff photoAndover's Lincoln Beal fights through a Central Catholic tackler on Friday. It was a special moment, returning to that gridiron rivalry.

Several hundred fans, in front of me, were in the seats, many there to root on Andover High.

Parents of senior players, managers, cheerleaders, etc. were lined up -- about 80 people in all -- as if they were getting a COVID-19 vaccination.

Football … make that … real football, was back. At least for me.

While it wasn’t Thanksgiving Day, when Central Catholic and Andover gave this area some football doozies over three decades, there was a lot to be thankful for when the rival Golden Warriors and Raiders met at Lawrence Veterans Memorial Stadium in Lawrence on Friday night.

There is a lot to complain about, with me at the front of the line, when it comes to dealing with this pandemic. But that is an argument for another day.

It’s the first time in over a year that I’ve attended a sporting event that felt normal.

The blue skies at the start were epic. The backdrop of the vast, North Andover tree line, to the north, was picturesque.

The best part, though, was inside the white lines.

It didn’t look like a disjointed event in which the Andover and Central Catholic student-athletes put in about 25% of the work they normally would for a season.

This was good, tough football, which is to be expected when Central and Andover meet.

We got to see a few, future bright lights. Andover sophomore QB Scotty Brown has shown flashes of greatness this "Fall II." Brown has completed 46 of 82 passes for 581 yards and three touchdowns and has rushed 79 times for 226 yards and six touchdowns.

Sharing the backfield with Brown is running back Lincoln Beal. He has carried 90 times for 464 yards and four touchdowns rushing and caught 23 passes for 302 yards and another TD. All of those are team-highs.

On Friday, we also got to see Central’s junior quarterback Ayden Pereira do what he does best, which is change the course of a game when it seems to matter most.

In the end, we got to see “the gold standard” as Andover High football coach E.J. Perry said about Central, hitting its stride in key spots.

The hitting was November style. Same with execution. Brown and Pereria are not normal. They are part of the new brand of QB, feet and arms included.

It wasn’t the prettiest football game, but when is it really pretty? These games against good teams are usually decided by mistakes. The team that makes the fewest, which was Central on Friday night, usually wins.

The best part, though, for me was after the game.

The teams, per the rules, are supposed to meet with their coaches for a post-game meeting soon after the clock expires.

That didn’t happen. About 20 to 30 players on each team started mingling, shaking hands. It represented the entire game, really. No cheap shots or personal foul penalties.

We can enjoy sports rivalries -- or “hate” if you want to call it that -- all we want and, I have to admit, sometimes it’s fun to follow.

But the respect shown afterward was a great, meaningful sign that they, really all of us, are in this together.

I assume there were rules broken – see COVID-19 manual – but sometimes you have to get out of the way.

Thanks to Central and Andover for a great night. The only thing missing was the postgame turkey.

You can email Bill Burt at bburt@andovertownsman.com.