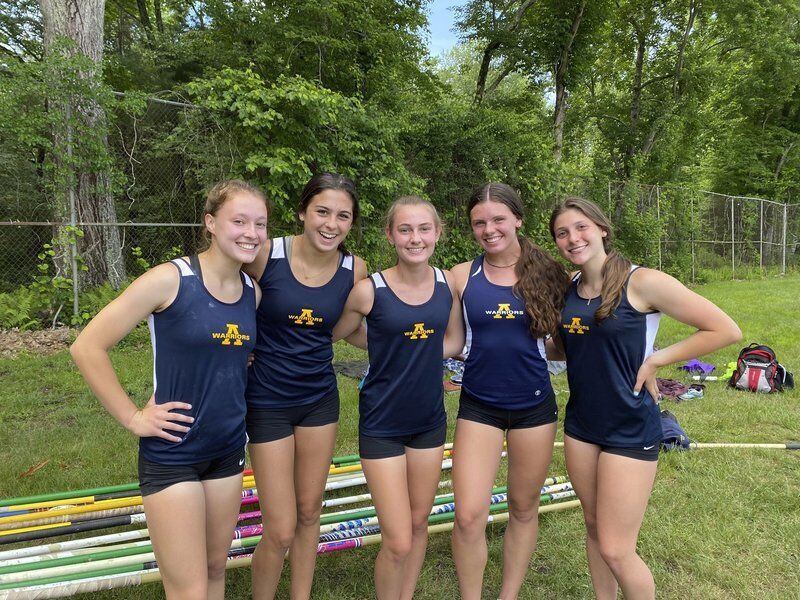 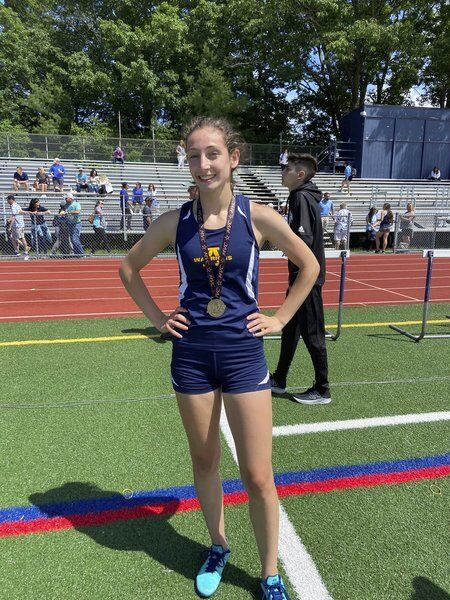 Courtesy PhotoKayla DiBenedetto poses with her gold medal after winning the 800 at the Merrimack Valley Conference Meet on Saturday. DiBenedetto won in a time of 2:22.59.

Courtesy PhotoKayla DiBenedetto poses with her gold medal after winning the 800 at the Merrimack Valley Conference Meet on Saturday. DiBenedetto won in a time of 2:22.59.

Andover athletes earned three individual victories and four more runner-up finishes as the Golden Warriors took third as a team at the Merrimack Valley Conference Meet on Saturday with 99 points. The meet was held at Andover’s Eugene V. Lovely Field.

Giordano does it all

Freshman pitcher Jackie Giordano earned the win while going 4 for 4 at the plate with two runs scored and two RBIs to lead Andover past Haverhill 6-5 on Friday. Paige Gillette added two hits and two RBIs and Morgan Shirley had two hits, scored a run and drove in one more for the winners.

Alyssa Sellinger was 3 for 3 with an RBI and a run scored as Andover beat Chelmsford 5-2 last Tuesday. Adelaide Weeden and Paige Gillette each added two hits and an RBI and Molly Duval chipped in with two hits of her own for the winners.

Hussain Mahesri had a key pin at 170 pounds and Yasser Maita get the clinching points with a 7-4 decision at heavyweight despite being outweighed by 60 pounds as Andover rallied from a 27-6 deficit to beat Chelmsford 31-27 on Friday.

In their first match together, Nate Gellman and Abhay Yajurvedi teamed for a 6-0, 6-2 victory at No. 2 doubles to help Andover beat Chelmsford 5-0 on Friday. The Golden Warriors improved to 11-0.

Jennie Wang stepped up for her first victory at No. 1 singles, as Andover beat North Andover 5-0. Rachel Chen and Evie O’Brien added singles wins for the Warriors, who improved to 12-0.

Despite three goals for Colin MacLean, Andover lost to Chelmsford 9-6 last Wednesday. Anton Pace, Campbell Allardi and Ethan Ruvido each added a goal for the Warriors.

Lily Farnham and Tess Gobiel each scored twice, but Andover lost to Chelmsford 12-7 on Friday. Jack Brussard, Hailey Doherty and Lauren Adams each scored once.