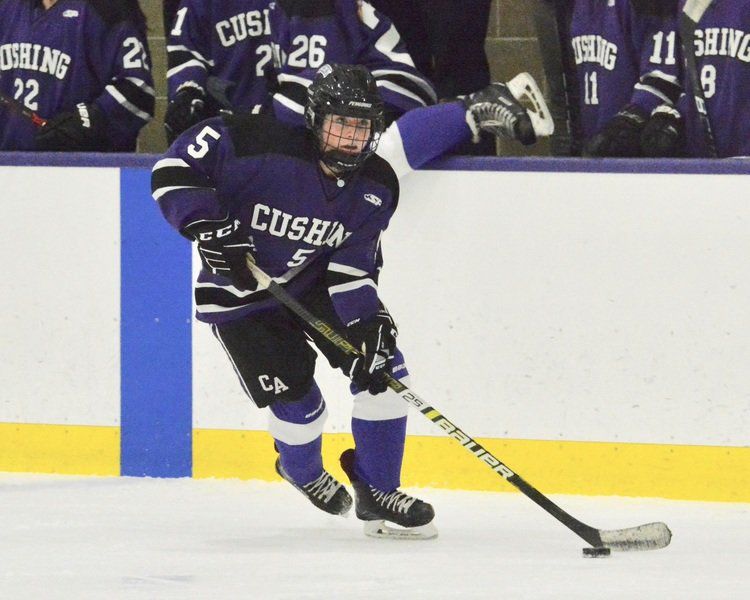 Courtesy photoAndover’s Michaela Littlewood skates with the puck for Cushing Academy. She helped lead the Penguins to the New England title. She is committed to play college hockey at Merrimack College. 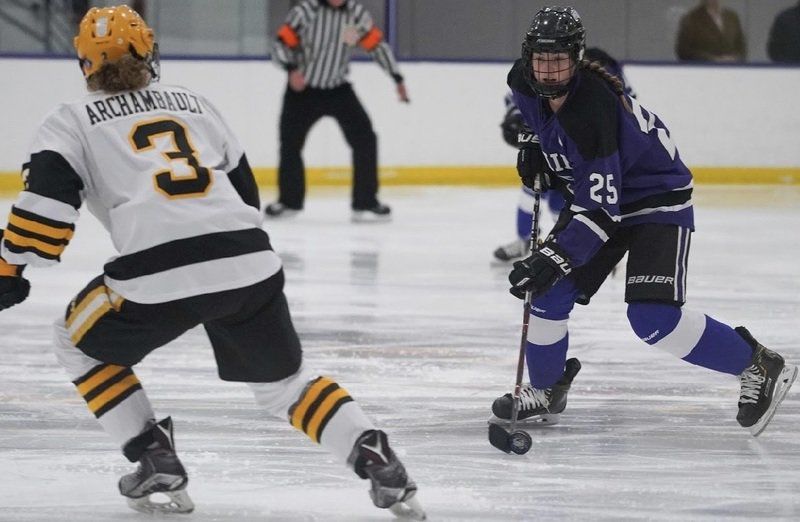 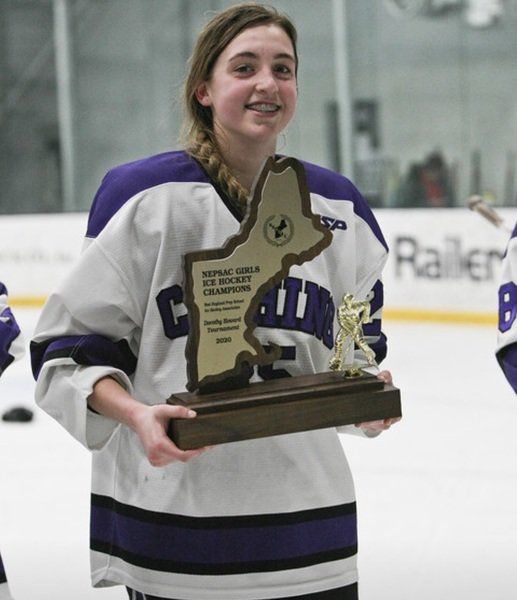 Courtesy photoAndover’s Shea Frost holds the trophy after helping lead Cushing Academy to the New England title last Sunday. She was one of two Andover residents on the team, along with Michaela Littlewood.

Courtesy photoAndover’s Michaela Littlewood skates with the puck for Cushing Academy. She helped lead the Penguins to the New England title. She is committed to play college hockey at Merrimack College.

Courtesy photoAndover’s Shea Frost holds the trophy after helping lead Cushing Academy to the New England title last Sunday. She was one of two Andover residents on the team, along with Michaela Littlewood.

One is a force on the blue line, a second-year varsity standout with the ability to hit and attack the offensive zone.

The other made her high school debut this season and showed a knack for putting the puck in the net and create plays.

Both are Division 1 college hockey commits who left their Andover homes to play for elite prep school Cushing Academy.

And, two weeks ago, Andover’s Shea Frost and Michaela Littlewood celebrated a New England championship on the ice together.

“Winning the championship was unbelievable,” said Frost. “Being the sixth seed and working our way up to the finals felt unreal. Then, being able to bring home the trophy for Penguin Nation, coach Val (Valerie Bono) and all the past players that supported us was the highlight of the winter!”

Frost, a sophomore, is a top defenseman who is committed to play hockey at powerhouse Boston College.

Littlewood, a freshman forward, is committed to the young Merrimack College hockey program.

Both played key roles for Cushing, which entered the tournament as the bottom (sixth) seed, just two games over .500, and still rolled to the championship, finishing the year 19-14-1.

“The title run was incredibly exciting,” said Littlewood. “We had to beat the No. 1 seed, No. 2 seed and No. 4 seed to win it all, and we did it. It was amazing. I was so happy for our entire team.”

This winter could not have started in a more perfect fashion for Frost.

“In our first game of the season, I scored the team’s first goal of the year against our rival Winchendon,” she said. “My freshman year, I opened the season against Winchendon and scored the first team goal, too. I hope to keep the streak alive and make it three years in a row next year!”

A lifelong Andover resident, Frost began playing hockey at 3-years-old. When high school arrived, she was immediately drawn to Cushing.

“I’ve always wanted to play at the highest level, and Cushing gave me the opportunity to do it,” she said. “Andover High and Phillips Andover are both great schools, but I knew I wanted to go the prep school route and experience living away. Once I visited Cushing, it felt like home.”

In December of 2018, Frost — who finished this winter with four goals — locked up her college future by committing to Boston College hockey.

“I’m so excited to have Division 1 hockey in my future,” she said. “I always knew I wanted to play in the Beanpot and attend a Boston school if I was lucky enough. Once I toured BC, and saw the beautiful campus and great coaches, it was an easy decision. BC has a great tradition, and I hope that when that time comes, I will be able to help the team continue their success.”

“Being a freshman, I just tried to do whatever the team asked of me,” said the winger, who scored five goals and added seven assists. “My strength is my speed, and I just tried to use that to make things happen for our team offensively and defensively.

“By far my favorite goal was my first score against Lawrence Academy at the Winchendon Tournament early in the season. It was great being on a line with two of my close friends and having my whole team celebrating with me!”

After growing up playing in the Andover Youth Hockey Association, Littlewood caught the eye of the Cushing coaches while playing club hockey.

“I met coach Val while I was playing for the North Shore Vipers,” remembered Littlewood, whose older sister Hannah played hockey at Phillips Exeter and brother Griffin attends Andover High.

“Val would be around clinics and skills sessions and I loved her from the first time I met her in seventh grade. I also had a lot of older friends like Shea Frost at Cushing. I just felt like Cushing was the best fit for me.

While she now plays hockey roughly an hour from Andover, her college hockey home will be considerably closer.

“My North Shore Vipers team won the U14 National Championship last spring and we were fortunate to have a lot of college coaches watching our games,” she said. “I really love how Merrimack is building their program. They have great coaches and I hope to be a big part in building a successful team.

“Playing Division 1 college hockey has always been a really big dream of mine, and I’m so happy I can make that dream a reality at Merrimack.”