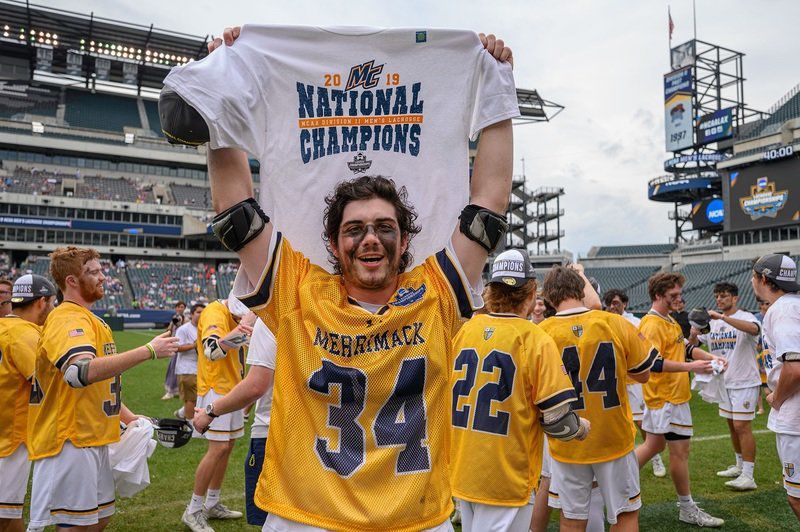 In their last game as a Division 2 program, the Warriors won their second straight Division 2 men’s lacrosse national championship, taking down previously undefeated Limestone, 16-8, at Lincoln Financial Field in Philadelphia.

Next season, the Warriors make the move to Division 1.

Merrimack’s road to the 2019 national championship was one of the toughest in history. The Warriors (17-3) had to knock off No. 3 Mercyhurst, No. 2 Adelphi and No. 1 Le Moyne just to face the top overall seed, Limestone (20-1) in the championship game.

“Our veterans held us together,” said Merrimack head coach Mike Morgan. “You don’t see it from the outside, but we faced a lot of adversity. We were fighting complacency and injuries early. They trusted us as a staff and they trusted their leaders.

“When you go through what we went through, losing some tough games, then beat all of our rivals and avenge our loss in 2017, these guys wrote their own story.”

Merrimack started strong on Sunday and had a 3-1 lead at the end of the first quarter. The Saints rallied to tie the score with two quick goals in the second, but from there, Merrimack went on a 7-0 run that lasted 15:28 to take a 10-3 lead early in the third quarter.

It looked as if the Warriors had the game well in control, but the top-seeded Saints held Merrimack scoreless for the next 15:38, going on a 4-0 run that cut the lead to 10-7. That run included two Merrimack penalties and a man-up goal for the Saints.

“We just needed to weather the storm,” said Merrimack’s Nick Ponte. “You’ll get scored on. We just needed to grind it out and know the offense would take care of it once we got the ball upfield to them.”

Merrimack’s offense did take care of it, and the Warriors’ best player took over and made his best plays.

Junior attacker Charlie Bertrand scored his 75th and 76th goals of the season to snap Limestone’s momentum and give the Warriors a more-comfortable 12-7 lead early in the fourth quarter. That included scoring one goal while cutting to the net and taking the shot behind his back.

But Bertrand’s dominance was only able to happen thanks to Davis Cronin’s monster day on faceoffs. Cronin won 18 of 27 faceoffs on the afternoon, reversing the story from two years ago when Limestone used lengthy possessions off of faceoff wins to beat the Warriors in the 2017 national championship game.

Limestone head coach J.B. Clarke said he thought Cronin should have been the MVP of the game for his work on the X.

“Charlie Bertrand is special, but he doesn’t do what he does today if that kid doesn’t win 18 faceoffs,” he said. “They doubled us up, and that’s a huge factor. You need to limit their possessions because they have guys like Bertrand.

“We didn’t play our best game, but a lot of that had to do with Merrimack. We weren’t used to losing faceoffs as we did. When you give them double the possessions off of faceoffs, they’re hard to defend. And that puts you in a hole right away. I’m pleased with how our D played, we just had to play too much of it.”

Cronin, Morgan said, was a microcosm of Merrimack’s entire team.

“Davis was awesome,” he said. “Like our team, he started slow and was finding confidence early in the year. Then he went through some adversity and he got injured. Then he got going, and when he’s going, well you saw what he can do.

“Coming into the game, we knew it would be tight. If you can win the faceoff battle, and 18 of 27 is a monster day, that gets our offense the ball and it keeps them off the field as much as possible.”

The Division 2 era is now closed at Merrimack, not just for the lacrosse program, but for the entire athletic department. And there was no better way to close it out.

“For us, it will be knowing what we have to do and grinding,” Morgan said. “We just grinded our way to a national championship. We’ve been running this thing for the last 8-9 years with a D-1 model, so it won’t change much.”