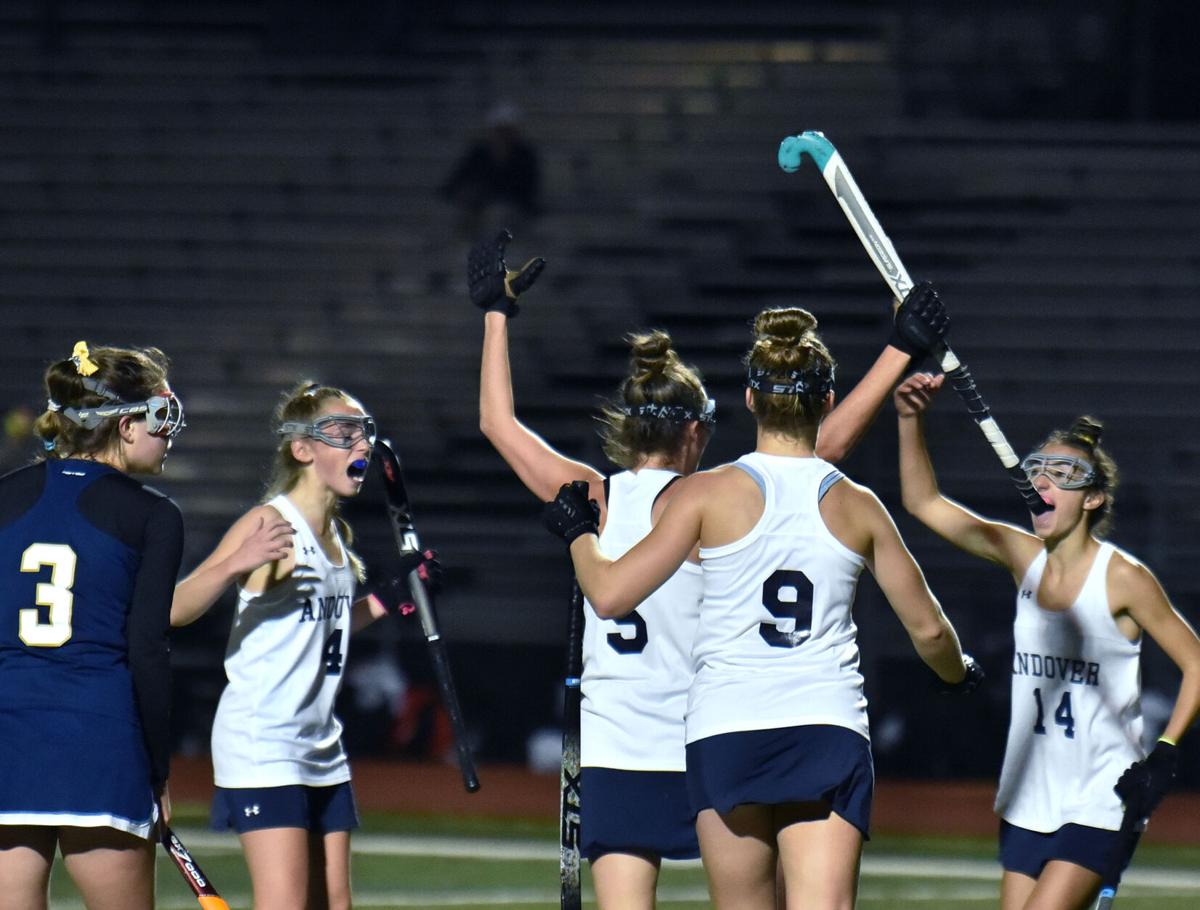 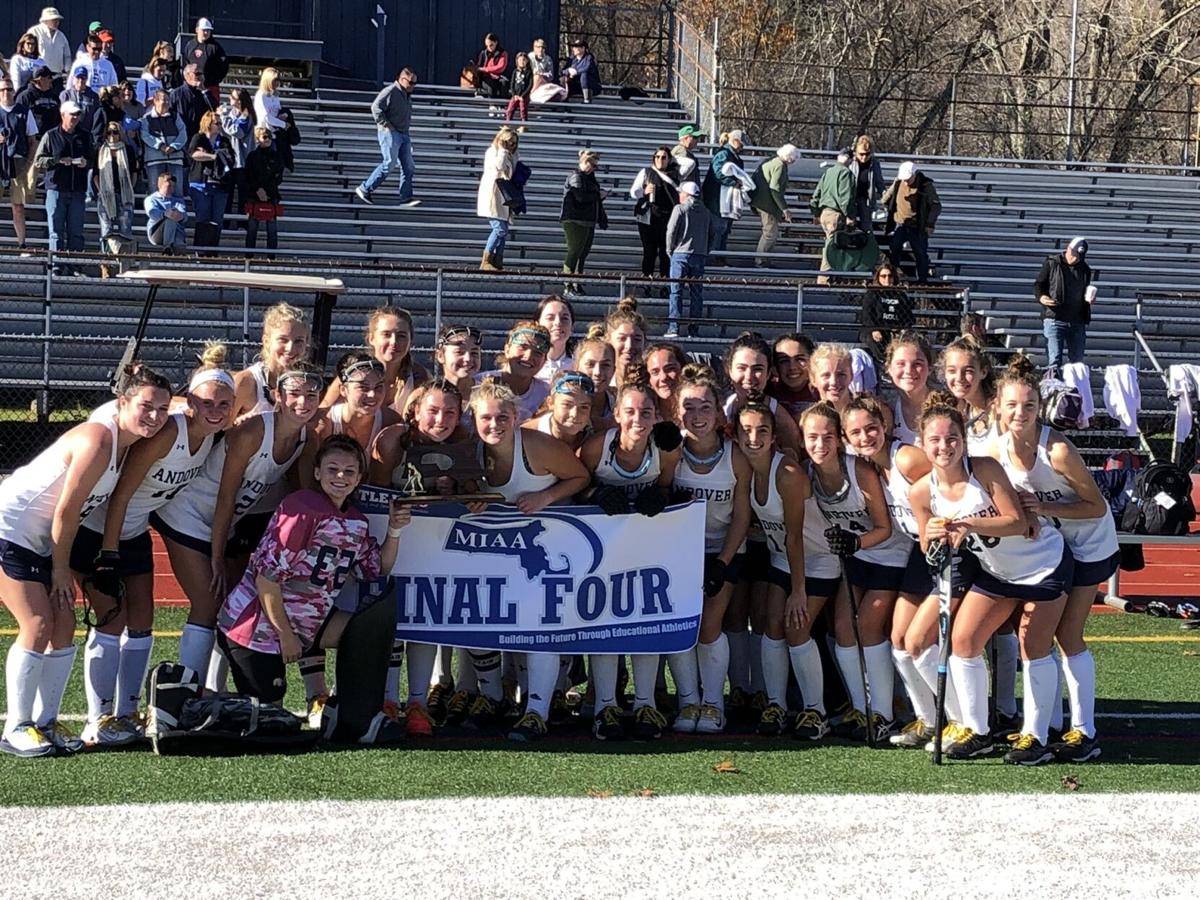 The Andover field hockey team celebrates with the Final Four banner after beating Shrewsbury 1-0 in the Division 1 quarterfinals on Saturday. 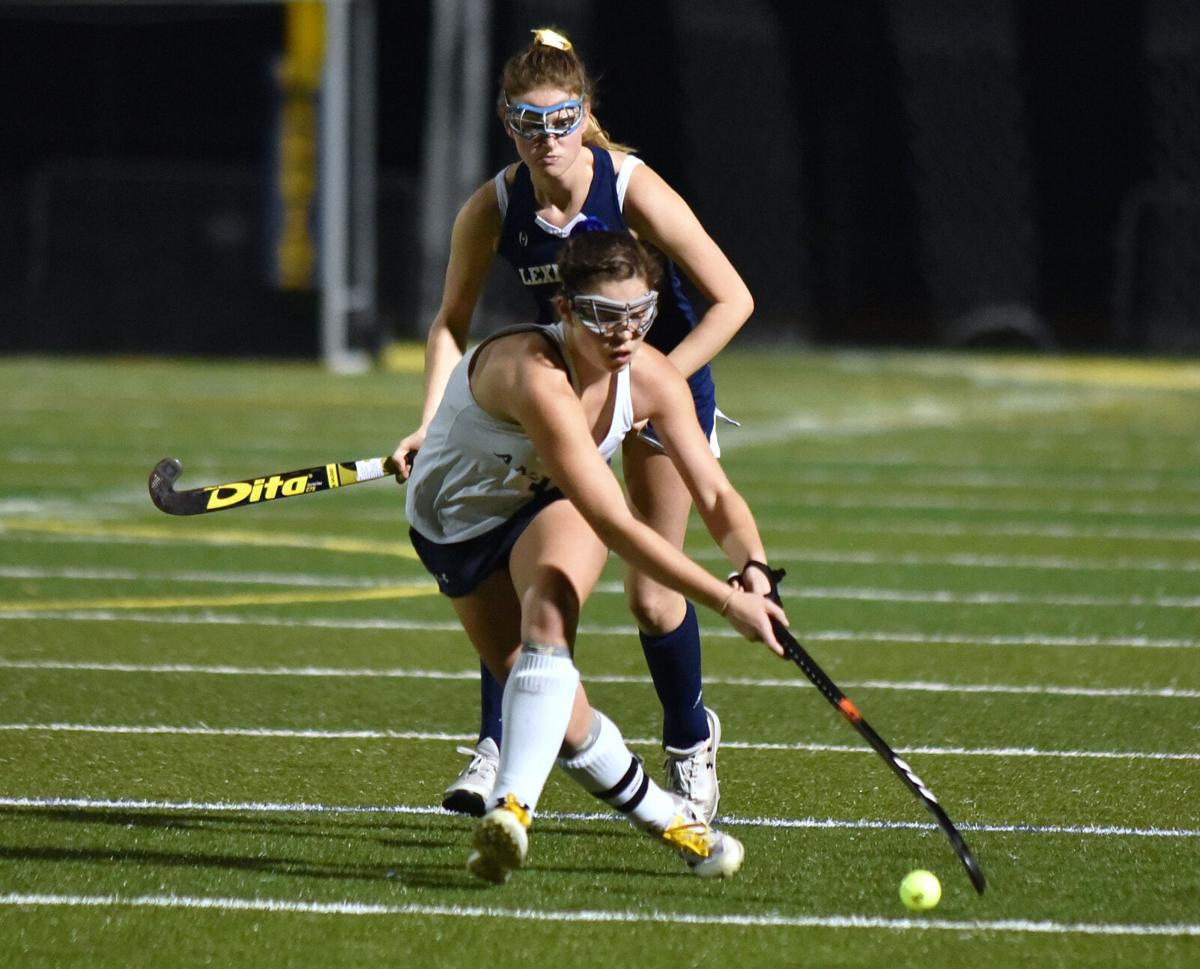 Andover captain  Emma Reilly races towards the goal. She scored the first goal of the game. Andover defeated Lexington 3-0 in the state tournament round of 16.

The Andover field hockey team celebrates with the Final Four banner after beating Shrewsbury 1-0 in the Division 1 quarterfinals on Saturday.

Andover captain  Emma Reilly races towards the goal. She scored the first goal of the game. Andover defeated Lexington 3-0 in the state tournament round of 16.

With eyes fixed on a state championship, the Andover High field hockey team simply would no be denied last week.

Andover may have rolled to a 6-0 win over Shrewsbury in the regular season, but Golden Warriors head coach Maureen Noone knew it would not be that easy in the playoffs against the No. 8-seeded Colonials.

“Shrewsbury had some big, fast and aggressive players,” said Noone. “Although we played them earlier in the season, we expected the score to be much closer than the six-goal win we had the first time.”

Noone was correct, but her squad was up to the task.

Andover managed just one goal, but was able to make it stand up in a 1-0 victory over Shrewsbury in the MIAA Division 1 quarterfinals on Saturday.

Haley Carver did the honors of scoring the winning goal, a third-quarter tally off a corner with a little help from her teammates.

“We started off slow and struggled to get the corner calls we were hoping to get,” said Noone. Much of the play was in the middle of the field.

“Our only goal came in the third quarter. Liv Beucler sent a perfect insert to Abby Miller who deflected it to Haley Carver who swept it in with authority. This is Haley’s second goal in the tournament, along with an assist.”

One goal ended up being plenty with the play of the Andover defense and goalie Adelaide Weeden (4 saves). But it wasn’t easy.

“With 20 minuted left in the game, our goal was to hang onto the lead and sub our forwards as quickly as we could to out-hustle Shrewsbury,” said Noone. “One of our senior captains, Abby Miller, pulled her hamstring and had to come off the field.

“Luckily, we had Lily Farnham — who has only been back since the end of regular season — who slipped back to steady our defense with Anna Broderick and Ella Brockelman while Abby was out. Adelaide also played a terrific game in net.”

Andover was scheduled to face No. 4 Franklin in the semifinals on Tuesday.

Rolling in Round of 16

Three different players contributed a goal as the top-seeded Golden Warriors rolled past No. 16 Lexington 3-0 in the MIAA Division 1 Round of 16 last Tuesday at Andover High’s Eugene V. Lovely Field.

“The girls came to play tonight,” said Noone. “We loved being on our home field! Our passing was on point and the defense from forward line back was amazing. The kids were enthusiastic and the subs created great opportunities.”

Junior star Emma Reilly gave Andover the lead in the second quarter, on a reverse chip for a shot from top of the circle. The tally was Reilly’s 23rd goal of the season.

Freshman Bella DiFiore made it 2-0 Golden Warriors at halftime, scoring her second career varsity goal, off an assist from senior Tess Gobiel. DiFiore, who had never played field hockey before this fall, scored her first goal last Tuesday in a win over North Andover.

Beucler closed out the scoring in the fourth quarter, with the assist going to sophomore Haley Carver. It was the 10th goal of the season for Beucler.

“Emma Reilly leads the team and controlled the tone of the game,” said Noone. “Liv Beucler set the tone on the field and on the offensive line. Our defenders played outstanding as usual with Anna Broderick, Abby Miller and Ella Brockelman playing smart. Rose Maclean and Hailey Doherty stepped up at midfield along with Emma.”

Weeden needed to make just two saves for her 12th shutout this season. It was also the 12th time Andover’s defense has allowed two or fewer shots on goal. The Warriors surrendered no shots in their playoff opener.

“Adelaide made only two saves, but they should have been goals,” said Noone. “She was once again excellent.”