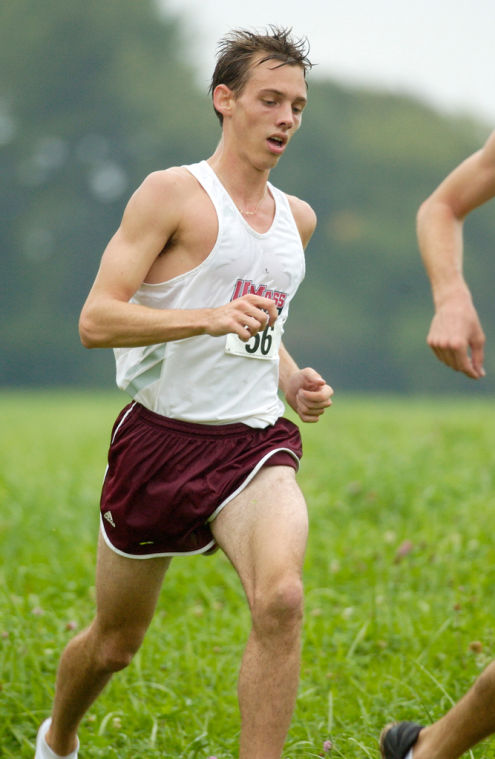 Ryan Durkin did it all at UMass Amherst, from where he graduated in May. A Commonwealth College honors student, he graduated with a 3.9 grade point average, was captain of the cross country team and is an aspiring entrepreneur. He is now looking to follow his brother into the Marines. 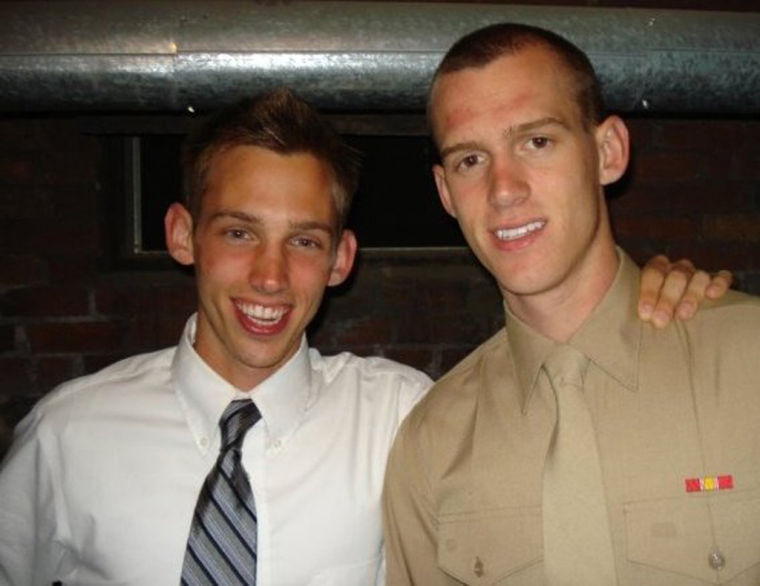 Ryan, left, and Brad Durkin have overcome a lot together. Brad, 20, who graduated Andover High a semester early in 2006 to join the Marine Reserves, suffered a burst appendix during a training exercise in June. After several surgeries, he's on the road to recovery.

Ryan Durkin did it all at UMass Amherst, from where he graduated in May. A Commonwealth College honors student, he graduated with a 3.9 grade point average, was captain of the cross country team and is an aspiring entrepreneur. He is now looking to follow his brother into the Marines.

Ryan, left, and Brad Durkin have overcome a lot together. Brad, 20, who graduated Andover High a semester early in 2006 to join the Marine Reserves, suffered a burst appendix during a training exercise in June. After several surgeries, he's on the road to recovery.

Ryan, 22, a recent University of Massachusetts Amherst graduate, wants to become a Marine. He's still deciding between the Reserves or Officer Candidate School, and recently hit a road block due to asthma and color blindness, but hopes to join. If not, he'll enter the business world.

But why, after earning his degree in finance and operations management, would a student with a 3.9 grade point average even consider boot camp over business school?

Professional success will come later, Ryan says. Now is the time to serve his country, to give back.

As kids, Ryan and his brother Brad, 20, talked about entering the military together. The few and proud Marines, as the commercials proclaim, enticed the Durkin boys.

"(Marines) share a special bond," Ryan Durkin says. "You see it when you talk to them. It's the ultimate fraternity."

Ryan remembers watching Brad march at boot camp graduation. Shoulders back. Hair high and tight. Something had changed in Brad. Ryan can't quite describe it. But he was sold.

"If you know any Marines, you kind of just tell," Ryan says. "It's 'Damn, that kid's got something. It's something I want to be.'"

Growing up in affluent Andover, Ryan, Brad and their older sister Lindsey, 24, were unique. Unlike many of their classmates, they held steady jobs. By the time he was 10, Ryan had moved on from a paper route to Indian Ridge Country Club, where he caddied and manned the bag room. He scoured the woods for stray golf balls, selling them to earn extra cash.

Still, the Durkins never had it easy. Their father, Walter, an executive at Market Basket, died of cancer when Ryan was 5. Nancy Durkin, a single mom who's worked as a teacher's assistant in town for the past 10 years, was left in charge.

There was no grumbling from the Durkins. But they wondered why other children, who seemingly had it so good, complained.

"Are you kidding me?" Nancy says her kids would ask in frustration. "At least you have a father."

Ryan also liked getting others jobs. Friend Pat Twomey spent many 16-hour days with Ryan in the Indian Ridge bag room. Hard work never stopped them from laughing the whole way through.

And whatever Ryan was doing, Brad was usually nearby.

"They are as close as any two brothers I've ever known," Twomey says.

When ancient Greek philosopher Antisthenes wrote, "When brothers agree, no fortress is so strong as their common life," he probably wasn't imagining Ryan and Brad's high school band.

With Brad on the drums and Ryan on piano, Stop Mom Minivan — SMV for short — once put on a benefit show that raised $1,000 for Andover's music department.

At 3 a.m., a park ranger's voice woke Ryan. He quickly scrambled out of his tent.

"He told me I had to get my (butt) home," he says. "It was just confusing. No one really knew what was going on."

He figured something was wrong with Brad, he just wasn't sure what. After he rushed home that mid-June night, Nancy informed him that Brad, who had shipped out with his unit to the West Coast in late May, was in the hospital.

That morning, they flew to the Marine Corps Air Ground Combat Center in Twentynine Palms, Calif., the desert base where Brad was stationed. During a field exercise, Brad was in severe pain. Eventually, it became too much, and he informed his superiors.

An ambulance rushed Brad to the Naval Hospital at Camp Pendleton, where doctors had to open him up to find the source of the problem. Brad's appendix, Ryan and Nancy were told, had burst. It was poisoning his organs. For a time, Ryan says, it didn't look good.

"(Doctors) told us that if he makes it in the next six to 12 hours he should be OK," Ryan says. "It's not the best thing to hear."

Brad made it. With Nancy and Ryan at his bedside, he fought through two weeks of treatment and surgeries.

At 6-foot-1, 165 pounds, Brad entered the hospital in the best shape of his life. That saved him.

"If he hadn't been so strong," Nancy says a doctor told her, "he wouldn't have made it."

The battle took its toll, Ryan says. Brad was bedridden. He lost weight and muscle mass. At one point, Ryan noticed Brad's once strong leg "shaking like Jell-O." It was a scary sight.

Brad took three weeks of convalescent leave, spending time back in Andover. It was painful, Ryan says, for Brad to be away from his Marine buddies. His deployment to Iraq, scheduled for September, would be pushed back to November.

Last week, Brad suffered a setback. He had another surgery, this time to remove a piece of his intestine. The procedure went well, Ryan says. Brad will soon be back in New England to recuperate, but it's unclear when he'll be sent to Iraq, if at all.

Ryan, a senior, and Brad, a sophomore, roomed together at UMass this past school year. Ryan's girlfriend, Sam Sacchetti of Weymouth, got to know both Durkins over the past 12 months.

"They're so similar, but so different," she says.

Ryan, the studious one, and Brad, the free spirit, are the same in one respect. Each watches over the other.

"I'm never afraid to tell him to knock it off if he's acting like a knucklehead," Ryan says of Brad, who finished his finals early last semester in order to join his Marine unit.

And Brad is never afraid to give big brother advice. Especially about the Marines.

"When you get out of college, you decide if it's for you," Brad told Ryan. "I know this is for me."

While pondering his future at UMass, Ryan developed a flair for business. He spent many nights going from dorm to dorm selling Boston sports T-shirts. He joined the Entrepreneur Club, eventually coming up with an invention he hopes to patent. (He won't divulge it yet.)

Ryan still had plenty of time to excel in the classroom and on the track. A member of the Commonwealth Honors College, he was a three-time recipient of the $1,000 Kenneth L. O'Brien scholarship, given to student-athletes with outstanding academic records.

He was voted team captain of the cross country team last fall and in both 2006 and 2007, he was named to the league's All-Academic team.

The effort paid off. At graduation, Ryan was one of 11 recipients of the University's 21st Century Leader Award. And on May 19, in front of 1,400 at the Francis Ouimet Scholarship's annual banquet, he delivered an emotional speech about his life and his desire to serve his country.

"I didn't realize it was going to be that huge," Nancy says of the crowd at the Boston Convention & Exhibition Center.

Golf legend Gary Player followed Ryan on the podium. Reportedly inspired by his words, Player pledged $100,000 to the Ouimet Fund.

After graduation in May, before the reality of entering the real world hit, Ryan and Twomey joined friends on a three-week road trip. They started in Andover and headed west, where they visited, among other locales, the Grand Canyon, Las Vegas and Southern California.

Outside a gas station in Wyoming, Twomey remembers meeting a man in a wheelchair who struck up a conversation about Plato.

"We kind of both looked at each other," Twomey says, "and said, 'Did that just happen?'"

Throughout the trip, Ryan traded text messages with Brad. Soon after the journey came to a close, reality hit hard.

Brad was in the hospital fighting for his life. Less than two months later, he's again on the road to recovery.

Ryan's dream may have taken a hit, but it's still alive. An appeal, he says, will determine whether a history of asthma and color-blindness will keep him from joining the Marines.

Ryan hopes he and Brad will one day be stationed together, watching out for each other like they've done all their lives.

Alan Siegel is a sportswriter at The Eagle-Tribune. E-mail him at ASiegel@eagletribune.com.