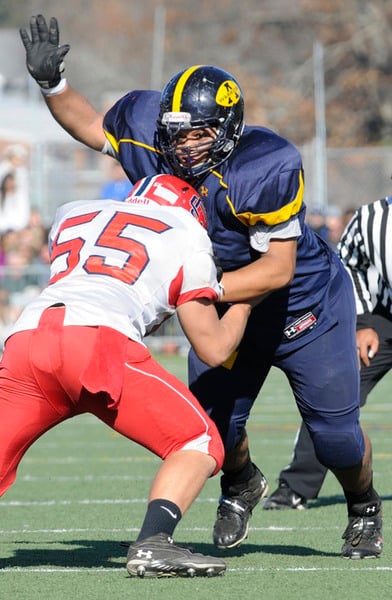 Junior Ommel Bonilla is a force on the defensive line for the Golden Warriors. He made 45 tackles last season. 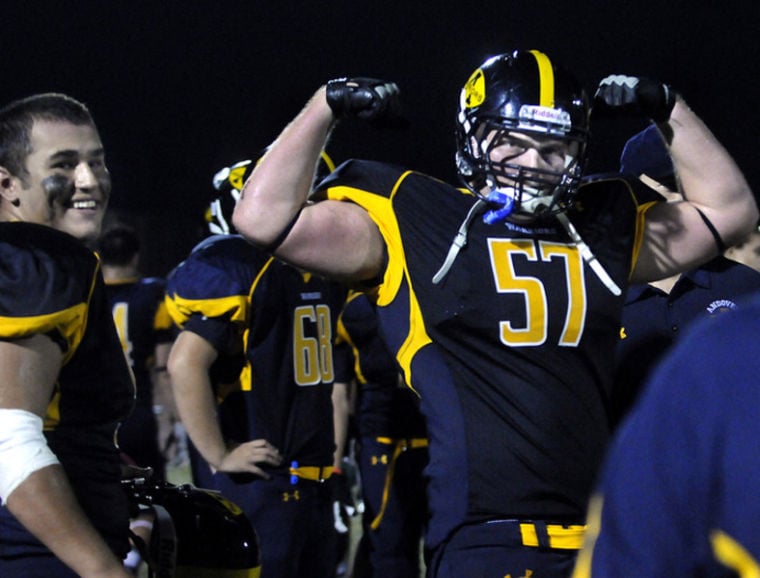 Senior lineman Ben Hartford brings plenty of muscle to the Andover High defense, which the Golden Warriors believe can win them games this season. Hartford and the Warriors expect to contend for a title. 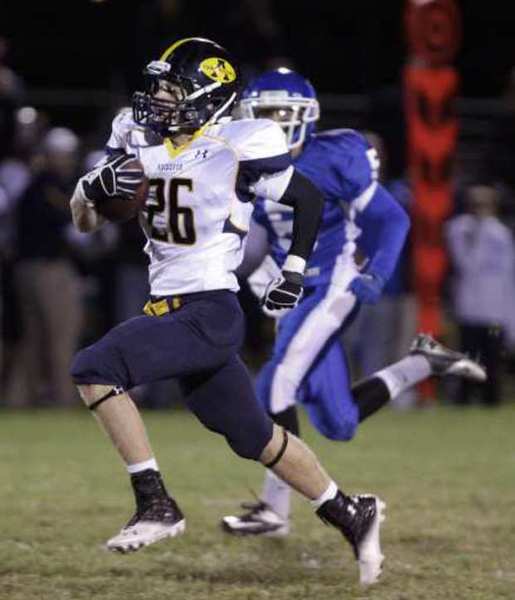 Jack Sylvester ran away from plenty of defenders on his way to 1,158 rushing yards and 10 touchdowns last season. He hopes for even greater success now that he is the focal point of the offense. 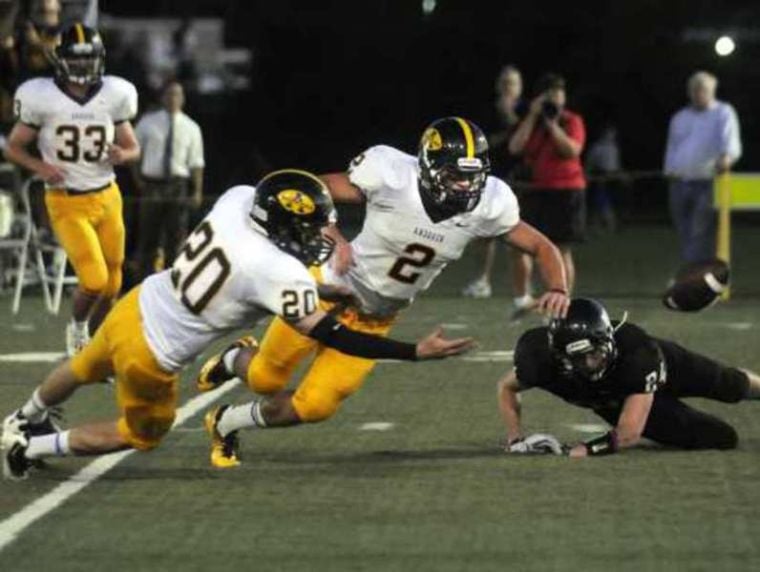 Will Eikenberry, No. 20, dives for a fumble two seasons ago. After a year away, the linebacker has returned to lead the Andover defense.

Junior Ommel Bonilla is a force on the defensive line for the Golden Warriors. He made 45 tackles last season.

Senior lineman Ben Hartford brings plenty of muscle to the Andover High defense, which the Golden Warriors believe can win them games this season. Hartford and the Warriors expect to contend for a title.

Jack Sylvester ran away from plenty of defenders on his way to 1,158 rushing yards and 10 touchdowns last season. He hopes for even greater success now that he is the focal point of the offense.

Will Eikenberry, No. 20, dives for a fumble two seasons ago. After a year away, the linebacker has returned to lead the Andover defense.

Andover is spending 2013 rebuilding and planning for future seasons ... right?

Anyone that believes the Golden Warriors are out of the race this season apparently has not seen MVC All-Star running back Jack Sylvester.

Led by its dynamic 1,000-yard rusher and a formidable defense fronted by linebackers Will Eikenberry and Brian Duffy and defensive back Brandon Marti, the Warriors appear poised to once again contend for the MVC Division 1 title and a play-off spot in the newly reconfigured MIAA football scene.

“You should never sleep on Andover,” lineman Ben Hartford said. “I feel like we have the best defense in the state, and yeah, our offense has a lot of young guys, but they can play and we feel like that will be a strength, too. We are feeling great going into the season.”

That will be put to the test this Friday, Sept. 6, when Andover opens the regular season by traveling down the road to North Andover to face the rival Scarlet Knights.

Hartford is not alone in his assessment of his team.

“We definitely hear the doubters,” Sylvester said. “I know we aren’t ranked in the top 25 in the state (or in Eastern Mass.). I also know that we should be ranked. And not in the 20s. When people see us play, they will see we can compete with anyone.”

Many spectators scratched their head when they first saw Sylvester jumping over defenders early in his debut varsity season of 2012.

But the halfback soon proved he had much more than just impressive leaping ability.

Andover may have had a reputation as a pass-first squad last season, with record-setting QB C.J. Scarpa and receivers Will Heikkinen, Cam Farnham and Andrew Deloury posting monster numbers. But Sylvester did plenty of damage on the ground.

“From afar, I watched the team and I didn’t know how they were going to replace (All-Scholastic) Andy Coke,” said Eikenberry of the Golden Warrior star back from 2010-11. “But then Jack stepped in and he was just great. And this year, he is bigger, stronger and faster.”

Sylvester’s breakout game was against Methuen in Week 3, when he rushed for 110 yards on just 10 carries and caught a nifty 70-yard touchdown. Two weeks later, he went off for 202 yards and two touchdowns against Tewksbury.

“What more can you say about how good Jack is?” Hartford said. “No doubt about it. I’m speechless about some of the things he does.”

But Sylvester knows that life could be more difficult now that defenses are gearing up to stop him.

“It feels good, but it also feels very different,” he said. “I have never been the guy in the spotlight before, with guys like C.J. and Heikkinen. But I really feel like I can handle it.”

The quarterback battle was still raging as the Warriors wrapped up the final week of the preseason. Junior Connor McCullough, sophomore Oliver Eberth and freshman E.J. Perry IV — son of head coach E.J. Perry — had all made strong cases for the job and no one was willing to guess.

Those stepping up at receiver include Cam Davey, Zach Walker — who at 5-foot-5 and 145 pounds has a similar build to the diminutive Farnham — and Christopher Nicholas.

A wildcard is sophomore Marti, who has seen time at halfback and slot receiver and may be the best athlete on the team.

They will be provided with protection by a tough offensive line led by Hartford.

“This line is the best,” Hartford said. “Along with me, there’s guys like Matt Sutliff and Chris Tully stepping up. I think it’s the best group on the field.”

Granted he may be a bit bias as a linebacker, but Will Eikenberry believes his side of the ball could dominate this season.

“It’s going to be defense all day for Andover,” said the senior. “The offense looks good, too, but I think the defense is going to win us some games this season.”

Eikenberry has reason to be excited, with plenty of talent around him.

“On defense, I feel like we are fast and very versatile,” Hartford said. “We can run different fronts against different offenses, and we have big kids that can step up.”

Leading the defensive line is junior Ommel Bonilla. The 295-pound, three-year varsity player made 45 tackles, including six for a loss as a sophomore. Players joining him include Hartford (3 1/3 sacks) and promising sophomore lacrosse star Alex Marshall.

Playing on the outside as hybrid defensive end/outside linebackers are John Oteri (47 tackles last season) and pass-rushing specialist Cole Organisciak (six sacks in 2012).

Leading the way at linebacker is Eikenberry, who took the long road back to Andover High.

After spending his freshman season at Brooks School, Eikenberry transferred to Andover as a sophomore. He then led the Golden Warriors in tackles with 87 total stops including 46 solo, seven for a loss and five sacks. He then spent his junior year at Brewster Academy, which does not have football, while being recruited to play college lacrosse before transferring back to Andover.

“I love football and really missed it for the year,” he said. “I also missed Andover and the guys. I missed the big-school atmosphere. I’m psyched to be back and playing again.”

Joining him at inside backer is junior Brian Duffy. Stepping in after the loss of injured star Mark Zavrl a season ago, Duffy turned in 49 tackles, the most for a returning Golden Warrior.

“Duffy is one big, solid kid,” Eikenberry said. “Very solid tackler. And we have some really fast guys on the outside. Brendan Slattery should see time, too”

When he isn’t running the football, Sylvester also stands out at safety alongside Davey.

“We have some very quick, hard-hitting safeties,” Eikenberry said. “And cornerbacks that can cover.”

Starting at one corner is Marti, a ball-hawk who has many excited, while Kevin Chen is expected to play the other side.

With all that, the Golden Warriors intend on making a run at a title.

“We want to go undefeated, and we want to make it to Gillette (Stadium) for the Super Bowl.”

Andover has to replace the record-setting duo of Eagle-Tribune offensive MVP C.J. Scarpa (area records 2,622 passing yards, 32 TD passes last fall) and Will Heikkinen (67 catches, 1,126 yards). ... Will Eikenberry returns to Andover after a year playing lacrosse at Brewster Academy. He led the team in tackles as a sophomore with 84. ... Jacob Lakos, who threw for 696 yards and 4 TDs last season as a sophomore at Salem High, transferred to Andover High. He spent his freshman year at Central Catholic. ... Alexander Marshall has already committed to play lacrosse at the University of North Carolina. ... The football weight room will be dedicated to lineman Mitch Stevens’ father, who passed away while helping a stranded motorist out of a snowbank last winter.